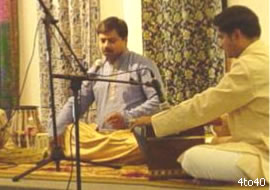 Rajendra Kandalgaonkar — Creative innovation in Hindustani Classical music has been the key to Rajendra Kandalgaonkar’s growth as an artist. Moving into the depths of Raga, he understands and responds to the emotional environment and the nature of the Raga. As he evokes the “alaap” of raga he builds a rapport with his audience. With original thought in “layakari” and “taans”, he performs with both the expected and unexpected surprises. This gives his singing a distinct and very attractive flavour.

A strong groundwork in music through training Rajendra Kandalgaonkar has been trained by some of the most renowned Gurus. At the young age of 7 he began his basic training in vocal music from Pandit Vishnu A Ghag, of the Gwalior Gharana. This spanned an intensive 18 years, from 1967 to ‘84.

Since 1980, he has the good fortune of being trained by Pandit Bhimsen Joshi, of the Kirana Gharana. matching this is his brilliant academic record as a formal student of music. He has topped the “Sanget Alankar” in 1978-79,in the Akhil Bhartiya Gandharva Mahavidyalaya Mandal, Miraj.

Rajendra Kandalgaonkar is a reputed teacher of music. He has performed at many well known concerts all over India, USA, Canada, with regular performances in Doordarshan and AIR.

He has also been conferred the highest “A” grade for Indian Vocal Music by AIR and Natya Sangeet (Marathi Stage Music).

Some Programs at Doordarshan and Akashvani

Mr. Rajendra visited USA and Canada recently from 13th July 2003 to 17th July 2003 and his concerts have been highly appreciated by the audiences there. His CD is very popular among Music Lovers of India, USA and Canada.