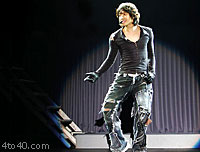 Rain’s musical career includes seven albums (six Korean, one Japanese), 19 singles and numerous concert tours around the world. His acting career began in 2003, when he won the KBS Best New Actor award for his role in the drama Sang Doo! Let’s Go To School. In 2004, Rain won the KBS Excellence in Acting award for his role in the drama Full House. After starring in A Love To Kill, he acted in his first Korean film, I’m a Cyborg, But That’s OK (2006), which won the Alfred Bauer Prize at the Berlin International Film Festival. Rain has acted in the American films Speed Racer (2008) and Ninja Assassin (2009), the latter of which made him the first Korean to win an MTV award.

Rain spent most of his childhood living with his parents and younger sister, Jeong Hanna, near Yonsei University. Despite being an introverted and shy child, he discovered he had a passion for dance when he performed in a talent show for High School. Rain initially had a difficult time balancing dance and academics and received low grades during the beginning of junior high because of his frequent dance practices. He decided to follow his passion and attended High School of Arts in where he received his first formal instruction in acting and was able to continue dancing as well. Rain again found he could not focus on both dance and his studies in acting; he was truant on several occasions.

Rain lost his mother as she struggled with diabetes and died in 2000. Within that same year, Rain was recruited as a trainee for JYP Entertainment, led by recording artist and producer Park Jin-Young. In a CNN interview and also in a Discovery Channel documentary called Discovering Hip Korea, however, he recalled being repeatedly rejected because of his looks: “In fact, I was told after one audition that my singing and dancing was great but I did not make it because I did not have double eyelids.” However, he finally got in as producer Park Jin-Young saw his drive and persistence during an audition in which Rain danced for hours non-stop, unlike the usual ten minutes for an audition. During the early years of training, Rain was a backup dancer.