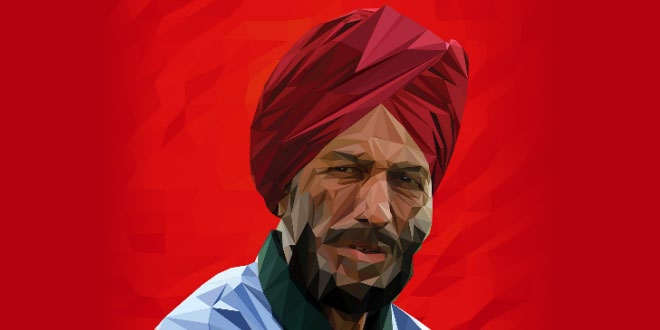 Milkha Singh has been an Indian Athlete, and considered to be one of the greatest Athletes the nation has ever produced. Also, nicknamed as the Flying Sikh, Milkha has been the only Indian Athlete till date to have broken an Olympic Record, still he lost the Bronze Medal in the 400 m event at Rome Olympic Games 1960 by just 0.1 seconds.

He was born on the 8th of October 1935 at Lyallpur (now in Pakistan), and had a very difficult childhood when he saw his parents and relatives being killed in front of his own eyes during the Indo-Pak partition Massacre. A 12 year old Milkha escaped for his life and hiding himself behind the corpses in the train to India, managed to get a new lease of life, though left all alone in the world by now.

Singh tried to get into the Army 3 times, but was rejected. Finally, his brother Malkhan Singh helped him get into the Electrical Mechanical Engineering branch of the Army in 1952, and it was there that he participated at the first sports meet in his life.

Making of a Champion

Under the guidance of his mentor Havaldar Gurdev Singh, Milkha began training hard and harder at the Army to become an accomplished Athlete. He showed his prowess for the first time at the Services Athletic Meet 1955, wherein he finished 2nd in the 200m and 400m race events. After delivering a much better performance and winning both the events at the National Games 1956 held at Patiala, Milkha went on to break the 200m and 400m records in the National Games 1958, held at Cuttack. He clocked 46.1m in 400m at National Games 1960 that was considered to be a World Class performance of that time. But, his best had still to arrive.

Milkha represented the nation in the Melbourne Olympic Games 1956, his first Olympic event. Although he couldn’t fare quite well at the event being less experienced at the time, he learnt a lot from the competition to prepare himself well for the future meets.

Probably the best period during Milkha’s career as an Athlete arrived between the year 1958 and 1960. He won Gold Medals in both 200m and 400m events at the Tokyo Asian Games 1958, clocking 21.6 seconds and 47 seconds respectively. At the Cardiff Commonwealth Games held the same year, he improved his 400m timing to 46.16 seconds, and grabbed a Gold Medal again.

The most important occasion in Milkha’s career arrived in the form of Rome Olympic Games 1960. In the first heat of 400m race at the Rome Olympic Games, he covered the race at 47.6 seconds and finished at 2nd position. In the second heat he further improved his timing and grabbed 2nd position again with a timing of 46.5 seconds. Karl Kaufman of Germany had outclassed him this time. In the Semi Final heat he still finished at 2nd place, although this time he further improved the timing with 45.9, beaten by only Ottis Davis of USA. In the final round of the coveted race, Milkha went off like an arrow and left all other competitors behind till the distance of 250m. It was when he miscalculated his own speed and committed the blunder of his lifetime and perhaps the history of Indian Athletics, by slowing down a bit. Although he tried the hardest of his lifetime to recover the distance, the other opponents had lagged him behind enough for him to catch them again. The competition was so tough that Ottis Davis and Karl Kaufman clocked 44.8 seconds, while Malcolm Spence of South Africa covered the race in 45.5 seconds. Milkha, who was initially leading the race, finished just 0.1 seconds later by Spence, clocking 45.6 seconds. The difference was so minute that the announcement was initially held up and further declared after a photo-finish. Thus Milkha, who was a favorite for the Gold, lost a Bronze by a whisker, probably the closest an Indian Athlete could get to an Olympic Medal till now.

Milkha Singh defeated the Fastest Pakistani runner Abdul Khaliq who had won a 100m Gold Medal at Tokyo Asian Games 1958 in the year 1962, and the Pak President Ayub Khan named him ‘the Flying Sikh’, a name that has became immortal forever in the history of Indian Athletics.

Honoring the incredible and hitherto the best performance by any Indian Athlete that Milkha Singh delivered throughout his sports career, he was bestowed upon the Padma Shri award (1958) and the Arjuna Award by the Government of India.