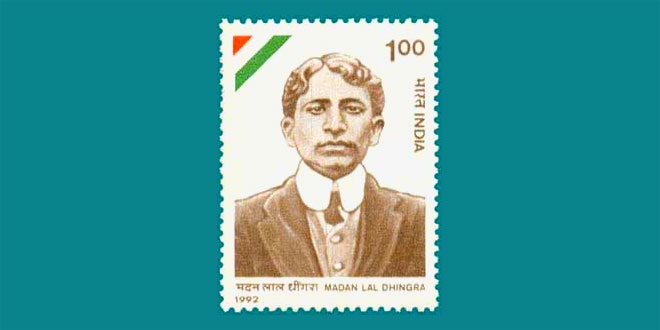 Madan Lal Dhingra (1883–1909) was an Indian revolutionary freedom fighter. While studying in England, he assassinated Sir William Hutt Curzon Wyllie, a British official, hailed as one of the first acts of revolution in the Indian independence movement in the 20th century.

Dhingra studied at Amritsar in MB Intermediate college until 1900 and then went to Lahore to study in Government College Lahore. In 1904 he led a student protest against the principal’s order to have the college blazer made of cloth imported from England. He was thrown out of college. At that time he was Student of Masters of Art. He was under the influence of Nationalist Movement of Swadeshi. He deeply studied the literature concerning the cause of Indian poverty and famines, as solution to these problems Swaraj and Swadeshi became key issues. Then Dhingra had to work as a clerk, at Kalka in a Tonga service being run to transport British families to Shimla, and as a factory laborer. Dhingra attempted to organise a union there, but was sacked. He worked for some time in Mumbai, before acting upon the advice of his elder brother Dr Bihari Lal and going to England for higher studies. In 1906, Madan Lal departed for England to enroll at University College, London, to study Mechanical Engineering. He was supported by his elder brother and some nationalist activists in England.

Dhingra came into contact with noted Indian independence & political activists Vinayak Damodar Savarkar and Shyamji Krishna Varma, who were impressed by Dhingra’s perseverance and intense patriotism which turned his focus to the freedom struggle. Savarkar believed in revolution by any means, and supposedly gave Dhingra arms training, apart from membership in a secretive society, the Abhinav Bharat Mandal. He was also a member of India House, the base for Indian student political activity.

During this period, Savarkar, Dhingra and other student activists were enraged by the execution of freedom fighters such as Khudiram Bose, Kanhai Lal Dutt, Satinder Pal and Pandit Kanshi Ram in India. It is this event that is attributed by many historians as having led Savarkar and Dhingra to exact direct revenge upon the British.

On the evening of 1 July 1909, a large number of Indians and Englishmen had gathered to attend the annual day function of the Indian National Association. When Curzon Wyllie, political aide-de-camp to the Secretary of State for India, entered the hall with his wife, Dhingra fired five shots right at his face, four of which hit their target. Cowasji Lalkaka, a Parsee doctor who tried to save Sir Curzon, died of Madan Lal’s sixth and seventh bullets, which the latter fired because Lalkaka caught hold of him.

Dhingra was tried in the Old Bailey on 23 July. He stated that he did not regret killing of Curzon Wyllie as he had played his part in order to set India free from the inhuman British rule. Also, that he had not intended to kill Cowasji Lalkaka. He was sentenced to death. After the judge announced his verdict, Dhingra’s said to have stated, “I am proud to have the honor of laying down my life for my country. But remember we shall have our time in the days to come”. Dhingra was hanged on 17 August 1909. Madan Lal also made a further statement which is rarely mentioned.

While he was being removed from the court, he said to the Chief Justice – “Thank you, my Lord. I don’t care. I am proud to have the honour of laying down my life for the cause of my motherland.”

“I believe that a nation held down by foreign bayonets is in a perpetual state of war. Since open battle is rendered impossible to a disarmed race, I attacked by surprise. Since guns were denied to me I drew forth my pistol and fired. Poor in wealth and intellect, a son like myself has nothing else to offer to the mother but his own blood. And so I have sacrificed the same on her altar. The only lesson required in India at present is to learn how to die, and the only way to teach it is by dying ourselves. My only prayer to God is that I may be re-born of the same mother and I may re-die in the same sacred cause till the cause is successful. Vande Mataram!”