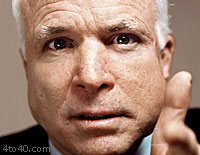 John McCain was born on August 29, 1936 at Coco Solo Naval Air Station in the Panama Canal Zone, to naval officer John S. McCain Jr. and Roberta McCain. At that time, the Panama Canal was under U.S. control. His family, including his older sister Sandy and younger brother Joe, followed his father to various naval postings in the United States and the Pacific.

In 1951, the family settled in Northern Virginia, and McCain attended Episcopal High School, a private preparatory boarding school in Alexandria. He excelled at wrestling and graduated in 1954. McCain followed his father and grandfather, both four-star admirals, into the United States Navy, graduating from the U.S. Naval Academy in 1958. On July 3, 1965, McCain married Carol Shepp, a model originally from Philadelphia. McCain adopted her two young children Douglas and Andrew. He and Carol then had a daughter named Sidney. He became a naval aviator, flying ground-attack aircraft from aircraft carriers. During the Vietnam War, he nearly lost his life in the 1967 USS Forrestal fire. In October 1967, while on a bombing mission over Hanoi, he was shot down, seriously injured, and captured by the North Vietnamese. He was a prisoner of war until 1973. McCain experienced episodes of torture, and refused an out-of-sequence early repatriation offer. His war wounds left him with lifelong physical limitations.

John McCain’s return to the United States reunited him with his family. His wife Carol had suffered her own crippling ordeal due to an automobile accident in December 1969. His return from POW made him a sort of celebrity. McCain underwent treatment for his injuries and attended the National War College at Fort McNair in Washington, D.C. during 1973–1974. Having been rehabilitated, by late 1974, McCain had his flight status reinstated, and in 1976 he became commanding officer of a training squadron stationed in Florida. He improved the unit’s flight readiness and safety records, and won the squadron its first-ever Meritorious Unit Commendation. McCain had extramarital affairs during this period in Florida and his marriage began to falter, for which he later accepted the blame. McCain served as the Navy’s liaison to the U.S. Senate beginning in 1977.

In April 1979, McCain met Cindy Lou Hensley, a teacher from Phoenix, Arizona, whose father had founded a large beer distributorship. He and his first wife Carol were divorced in April 1980 on the basis of the settlement that included two houses, and financial support for her ongoing medical treatments due to her 1969 car accident. McCain and Hensley were married on May 17, 1980, with Senators William Cohen and Gary Hart attending as groomsmen. McCain’s children did not attend, and it took several years to reconcile. John and Cindy McCain entered into a prenuptial agreement that kept most of her family’s assets under her name; they would always keep their finances apart and file separate income tax returns.

McCain retired from the Navy on April 1, 1981 as a captain. He was designated as disabled and awarded a disability pension. Upon leaving the military, he moved to Arizona. His 17 military awards and decorations include the Silver Star, Legion of Merit, Distinguished Flying Cross, Bronze Star and Navy Commendation Medal, for actions before, during, and after his time as a POW. Living in Phoenix, he went to work for Hensley & Co., his new father-in-law Jim Hensley’s large Anheuser-Busch beer distributorship. As Vice President of Public Relations at the distributorship, he gained political support among the local business community, meeting powerful figures such as banker Charles Keating, Jr., real estate developer Fife Symington III and newspaper publisher Darrow “Duke” Tully. In 1982, McCain ran as a Republican for an open seat in Arizona’s 1st congressional district. In 1983, McCain was elected to lead the incoming group of Republican representatives, and was assigned to the House Committee on Interior Affairs.

In 1984, McCain and Cindy had their first child together, daughter Meghan, followed two years later by son John Sidney (Jack) IV, and in 1988 by son James (Jimmy). In 1991, Cindy McCain brought an abandoned three-month old girl needing medical treatment to the U.S. from a Bangladeshi orphanage run by Mother Teresa. The McCains decided to adopt her and named her Bridget.

After being elected to the U.S. House of Representatives in 1982, he served two terms, and was then elected to the U.S. Senate in 1986, winning re-election easily four times, most recently in 2010. After being investigated and largely exonerated in a political influence scandal of the 1980s as a member of the Keating Five, he made campaign finance reform one of his signature concerns, which eventually led to the passage of the McCain-Feingold Act in 2002. He is also known for his work towards restoring diplomatic relations with Vietnam in the 1990s, and for his belief that the war in Iraq should be fought to a successful conclusion. McCain has chaired the Senate Commerce Committee, has opposed spending that he considered to be pork barrel, and played a key role in alleviating a crisis over judicial nominations.

McCain ran for the Republican presidential nomination in 2000 but lost a heated primary contest to George W. Bush. He secured the nomination in 2008 after coming back from early reversals, but lost to Democratic candidate Barack Obama in the general election.