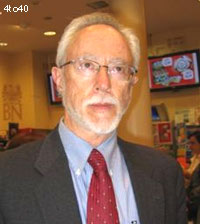 John Maxwell Coetzee is an author and academic from South Africa (now an Australian citizen living in South Australia). A novelist and literary critic as well as a translator, Coetzee won the 2003 Nobel Prize in Literature.

Coetzee is known as reclusive and eschews publicity to such an extent that he did not collect either of his two Booker Prizes in person. South African author Rian Malan wrote that Coetzee is “a man of almost monkish self-discipline and dedication. He does not drink, smoke or eat meat. He cycles vast distances to keep fit and spends at least an hour at his writing-desk each morning, seven days a week. A colleague who has worked with him for more than a decade claims to have seen him laugh just once. An acquaintance has attended several dinner parties where Coetzee has uttered not a single word.” As a result of his reclusive nature, signed copies of Coetzee’s fiction are very highly sought after.

Coetzee was the first author to be awarded the Booker Prize twice: first for Life & Times of Michael K in 1983, and again for Disgrace in 1999. Only one author has matched this since – Peter Carey, an Australian. On 2 October 2003 it was announced that he was to be the recipient of the Nobel Prize in Literature. He was praised for “in innumerable guises portraying the involvement of the outsider.”

The citation lauded his “well-crafted composition, pregnant dialogue, and analytical brilliance,” while focusing on the moral nature of his work.