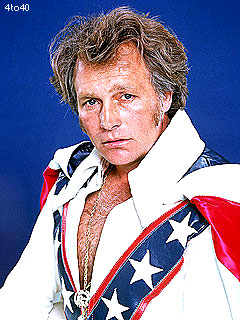 Robert Craig “Evel” Knievel, Jr was an American motorcycle daredevil, an entertainer famous in the US and elsewhere between the late 1960s and early 1980s. Knievel’s nationally televised motorcycle jumps, including his 1974 attempt to jump Snake River Canyon at Twin Falls, Idaho, represent four of the 20 mostwatched ABC’s Wide World of Sports events to date. His achievements and failures, including his 40 broken bones, earned him several entries in the Guinness Book of World Records.

After a police chase in 1956 in which he crashed his motorcycle, Knievel was taken to jail on a charge of reckless driving. When the night jailer came around to check the roll, he noted Robert Knievel in one cell and William Knofel in the other. Knofel was well known as ‘Awful Knofel’ (‘awful’ rhyming with ‘Knofel’) so Knievel began to be referred to as Evel Knievel (‘Evel’ rhyming with ‘Knievel’). He chose this misspelling because of his last name and because he didn’t want to be considered ‘evil’.

Knievel sought to make more money off of his image. He was no longer satisfied with just receiving free motorcycles to jump with. Knievel wanted to be paid to use and promote a company’s brand of motorcycles. After Triumph, the motorcycle company he had been jumping with refused to meet his demands, Knievel started to propose the idea to other manufacturers. American Eagle Motorcycles was the first company to sign Knievel to an endorsement deal. At approximately the same time, Fanfare Films started production of The Evel Knievel Story, a 1971 movie starring George Hamilton as Knievel.

While Knievel was healing from his latest round of injuries, the book Evel Knievel on Tour was released. Authored by Knievel’s promoter for the Snake River Canyon jump, Shelly Saltman, the book painted a less than perfect picture of Knievel’s character and alleged he abused his wife and kids and he used drugs. Knievel, with both arms still in casts, flew to California to confront Saltman, a VP at Twentieth Century Fox. Outside the studio commissary, one of Knievel’s friends grabbed Saltman and held him, while Knievel attacked him with an aluminum baseball bat, declaring, “I’m going to kill you!” According to a witness to the attack, Knievel struck repeated blows at Saltman’s head, with Saltman blocking the blows with his left arm. Sheldon Saltman’s book was pulled from the shelves by the publisher after Knievel threatened to sue. Saltman later produced documents in both criminal and civil court that proved that, although Knievel claimed to have been insulted by statements in Saltman’s book, he and his lawyers had actually been given editorial access to the book and had approved and signed off on every word prior to its publication.