Erik Weihenmayer (born September 23, 1968) is the first blind person to reach the summit of Mount Everest, on May 25, 2001. He also completed the Seven Summits in September 2002. His story was covered in a Time article in June 2001 titled Blind to Failure. He is the author of Touch the Top of the World: A Blind Man’s Journey to Climb Farther Than the Eye can See, his autobiography.

After he became blind, at first, Weihenmayer did not want to use a cane or learn Braille. He wanted to prove that he could continue living as he had. He tried to play ball, but once he understood that he was incapable of doing so, he learned to wrestle. In high school he went all the way to the National Junior Freestyle Wrestling Championship in Iowa. At that time he started using a guide dog. Then he went to Boston College and graduated as an English major. He became a middle-school teacher and wrestling coach. In 1997, he married Ellie Reeve The wedding took place at Mount Kilimanjaro in Tanzania. They have a daughter, Emma.

Erik is an acrobatic skydiver, long distance biker, marathon runner, skier, mountaineer, ice climber, and rock climber. He is a friend of Sabriye Tenberken, whom he visited in Tibet to climb with teenagers from the school for the blind. A documentary film based on the project, Blindsight, was released in 2006. Another documentary, Fellowship of the Andes, was produced by Dutch filmmaker Bernd Out. The film shows how Erik inspires a team of blind and visually impaired students on their mountain trek across the Andes in June 2006. In addition, Erik is an active speaker on the lecture circuit. He is represented by Leading Authorities speakers bureau.

In 2011, he competed on ABC’s Expedition Impossible.

Erik Weihenmayer, 33 years old is not just any other blind guy to climb Everest. He was much confident of what he was doing. He lost his eyesight at the small age of 13. It was because of a rare hereditary disease of the retina. Erik knew almost as soon as he started speaking that he would lose his vision in his early teens. But he accepted this disability rather than denying it. He grew up with his 2 brothers in Hong Kong and was an athletic kid.

His blindness was a medical inevitability and he accepted it something like a disease AIDS which will consume him. At the age of 10 he knew that at what point of life his world will be dark. You really need a big heart to accept this. Being just a kid when he lost his vision he just refused to use a cane or learn Braille, trying to live on as normal. After few embarrassing situations-”not able to fins the school restroom”- he admitted that he needs help. For Erik the key was not to fight his disability but to work within it. He wanted to learn what he was capable of achieving within his blindness rather than pretending that he had sight. 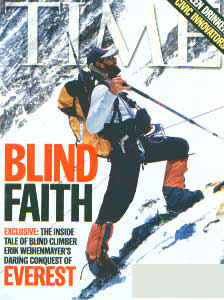 Erik was upset with the fact that could never play baseball or catch a football again, but then he discovered wrestling, which was the sport where feel and touch mattered more than sight. He excel himself and made his way to National Junior Free style wrestling Championship in Iowa when he was in the high school. Wrestling gave him the confidence to re-enter the teenage social fray.

Erik first went hiking with his father when he was 13. Trying to tap his way into the wild with a white cane, getting frustrated of stubbing his toes into branches and trunks. But when he tried rock climbing, at the age of 16 while at a camp for the disabled in New Hampshire, he was hooked. He found that like wrestling, it was a sport in which being blind didn’t have to work against him. He started climbing and soon found his way to formal mountaineering. His hands worked like antennae, gathering information as they flick outward, surveying rock for cracks, grooves, bowls, nubbins, knobs, edges and ledges, converting all of it into a road map etched into his mind. He is an accomplished rock climber, rated 5.10 (5.14 being the highest) and has led teams up sections of Yosemite’s notorious EI capitan.

On ice, where one wrong strike with an ice ax can bring down on avalanche, Erik has learned to listen to the ice as he pings it gently with his ax. If clinks, he avoids it. If it makes a think like a spoon hitting butter he knows its solid ice.

Despite being an accomplished maountaineer-summiting Denali, Kilimanjaro in Africa and Aoncagua in Argentina, among other peaks. Friends called him ‘running 14ers’ (14000-ft peaks). Erik viewed Everest as insurmontable until he ran into Scaturro at a sportswear trade show in Salt Lake City Utah. Scaturro had already summited Everest and he had heard of the blind climbers. When they met the two struck an easy rapport. A geophysicist, who often put together energy company expeditions to remote areas in search of petroleum, Scaturro began wondering if he could help Erik get to the summit of Everest.

Scaturro and Erik assembled a team that combined veteran Everest climbers and trusted friends of Erik’s. Scaturro wrote up a Braille proposal for Everest attempt and submitted it to Marc Maurer, president of National Federation of the Blind. Maurer immediately pledged $250,000 to sponsor the climb. For Erik who already had numerous gear and clothing sponsors, this was the greatest challenge of life. If he failed, he would be letting down not just himself but all the blind, confirming that certain activities remained the preserve of the sighted. He wasn’t afraid of physical danger-he had made dozens of skydives and scaled some of the most dangerous cliff faces in the world-but he was frightened of how the world would perceive him. But he knew that if he went and failed that would feel better than if I didn’t go at all.

Oxygen deprivation does strange things to the human body. Heart rates go haywire, brain function decreases, blood thickens, intestines shut down. Bad ideas inexplicably pop into your head, especially above 25,000 ft. At that altitude, Erik could rely on no one but himself. His teammates would have to guide him, to keep ringing the bell and making sure Erik stayed in the track, but they would primarily concerned about their own survival in some of the worst conditions on earth. Erik had some advantages as they closed in on the peak. For one thing, at that altitude all climbers wore goggles and oxygen masks, restricting their vision so severely that they could not see their own feet- a condition Erik was used to.

The final push for summit began in the early evening, so most of the climb was in pitch darkness; the only illumination was from miner’’ lamps. When Erik and the team began the final ascent from Camp 4-the camp he describes as Dante’s Inferno with ice and wind-they had been on the mountain for two months, climbing up and down and then up from Base Camp to Camp1, 2and 3, getting used to the altitude and socking away enough equipment-especially oxygen canisters-to make a summit push. At 29,000 ft, the Everest peak is in the jet stream, which means that winds can exceed 100 m.p.h. and that what looks from sea level like a cottony wisp of cloud is actually a killer storm at the summit.

This Everest expedition could be called the most successful one not just because of Erik’s participation, but because of a record, 19 climbers from N.F.B team summited, including the oldest man ever to climb Everest-64 years old- Sherman Bull- and the second father-and –son team ever to do so- Bull and his son Brad.

What Erik achieved is hard for sighted person to comprehend. Perhaps the point is really that there is no way to put what Erik has done in perspective because no one has ever done anything like it. It is a unique achievement one that in the truest sense pushes the limits of what man is capable of.