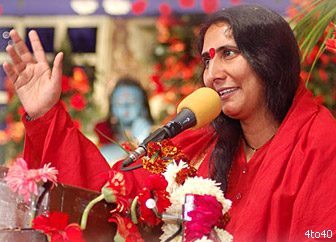 Over the years, Sadhvi Ritambharaji has emerged as one of the most prominent Indian spiritualist in the contemporary times. Though there have been many who have been charmed by the spiritual and the divine affection of the mother, it is only Sadhvi Rithambaraji who has tried to mould this affection into a village of maternal love.

It is very difficult either to quantify or to describe Didi Maa’s reach to the masses. It is not surprising that millions of people throng to listen to her thought provoking discourses – not only in India, but also in many other countries. So enthralled are people with her reason and her philosophies that they record her discourses and speeches so that it can be relayed anytime they want.

Didi Maa reaches millions of homes everyday through the medium of popular TV channels where her bhakti sadhanas and pravachanas are telecasted everyday. She has been called a Tapa Siddha Sanyasini, a sage, whose devotion to the seeking of higher consciousness has borne fruit in this lifetime. Her Guruji, the Revered Yugpurush, asked her to devote her life to the welfare of the community and so she has done with unflinching devotion.

Under the inspiration, guidance and compassion of the great saint Pujya Acharya Mahamandaleshwar Yugpurush Swami Parmanand Giriji Maharaj, her sadgurudev, Didi Maa has dived into the depth of spiritualism to find the pearls of peace and tranquility. To realize her vision, she has renounced the worldly and material comforts. Today, she works to evoke the Indian mother’s real spirit. Sadhviji believes that every newborn is a divine creation since every soul is born to fulfill a divine mission. Deprived of parents, particularly mother, some children have to seek refuge in orphanages which never provide self respect and a sense of mother’s protection which is normally available in a family, and so, the inception of Vatsalya Gram is another step in the direction of her vision.

Sadhvi Ritambhara ji vision, her goal, her dedication is towards a better world and a better life and preserving the ancient rich Indian heritage and culture. Her vision is not limited only to this aspect of human perils. She has given concepts such as Sanskar Vatika to train women missionaries for the spiritual development of the humanity, Kreedangan for physical and mental training, Gyanodaya and Gyanvardhini to enhance knowledge in best of Indian tradition, Arogya Vardhini for nature-cure, yoga, physical and moral training, Udyamika for Vocational training for self reliance, Nihsarg to develop nature care, Sanskarganga for ritual training Upvan for useful flora and fauna, Godham for developing cows and their progeny, Sanjivani for training to search medicinal plan.

Initially such Vatsalya Grams are being established at three places, the Holy City of Vrindaban (Mathura), U.P, Omkareshwar (MP) located on the banks of river Narmada and Solan (Himachal Pradesh). Sadhvi Ritambhara ji is now in the stages of building more Vatsalya Grams in different regions of India.

The Vatsalya Gram project is being undertaken by a recognized charitable society namely Param Shakti Peeth under the kind patronage of Pujya Yugpurush Shri Swami Parmanandji Maharaj. In each Vatsalya Gram, there are a number of Vatsalya families. Each Vatsalya family consists of 5 destitute girl babies, 2 destitute male babies, one mother, one mausi and a grand mother. There is no blood relationship in this Vatsalya Family but all of these relations are interlocked with emotional feelings created out of inspirations of the great motherhood of Maa Yashoda, the mother of Lord Krishna who had not given birth to the Lord but had given such an affection that made him Yogeshwar. The Vatsalya Gram is an alternate to the concept of Orphanage and the young women’s shelter and the old women’s home where everybody lives aimlessly. She has established Vatsalya Grams to maintain educate and make them useful members of the society.

Sadhvi Ritambhara ji unflinching determination on the project of Vatsalya Gram has made it possible to envision a potential for Vatsalya Gram’s replication in many parts of India and other developing countries. Her speeches are soul stirring. Sadhvi Ritambhara ji is devoutly spiritual and observes a strict code of conduct based on Dharma. Sadhvi Ritambhara ji has immense inner strength which we may say is like Shakti of the Goddess. She makes no demands or attempts to enforce her views or beliefs on others. She mesmerizes the audience as she speaks like a divine mother whether it is giving details of her Vatsalya Gram or about national pride or about the scriptures.

Share
Previous What is latte art?
Next Diego Forlan