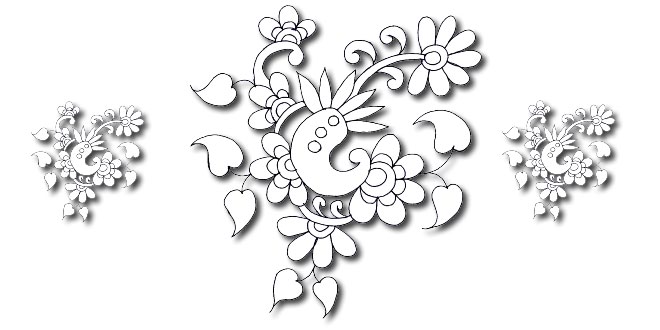 Chikan or Chikankari Embroidery: The present form of chikan (meaning elegant patterns on fabric) work is associated with the city of Lucknow, in Uttar Pradesh. Chikan embroidery on silk is Lucknow’s own innovation. The other chikan styles are that of Calcutta and Dacca. However, characteristic forms of stitch were developed in Lucknow: phanda and murri.

Chikan embroidery is believed to have been introduced by Nur Jahan, the wife of Jahangir. Chikan embroidery involves the use of white thread on white muslin (tanzeb), fine cotton (mulmul), or voile, fine almost sheer fabrics which showcases shadow work embroidery the best. Other colors can also be used.

The artisans usually create individual motifs or butis of animals and flowers (rose, lotus, jasmine, creepers). The designs are first printed onto the fabric not with chaulk, but with a mixture of glue and indigo.

At least 40 different stitches are documented, of which about 30 are still practiced today and include flat, raised and embossed stitches, and the open trellis-like jaali work. Some of the stitches that are used in Chikankari work include: taipchi, pechni, pashni, bakhia (ulta bakhia and sidhi bakhia), gitti, jangira, murri, phanda, jaalis etc. In English: chain stitch, buttonhole stitch, French knots and running stitch, shadow work. Another is the khatao (also called khatava or katava).

Share
Previous Textile Patterns & Embroidery Designs 9
Next 2018 Gurpurab Dates: When are Gurpurabs in 2018