Brahma is often credited as the creator of the universe and various beings in it, several Puranas describe him being born from a lotus emerging from the navel of the god Vishnu. Other Puranas suggest that he is born from Shiva or his aspects, or he is a supreme god in diverse versions of Hindu mythology. Brahma, along with all deities, is sometimes viewed as a form (sarguna) of the otherwise formless (nirguna) Brahman, the ultimate metaphysical reality and cosmic soul in Advaita philosophy. 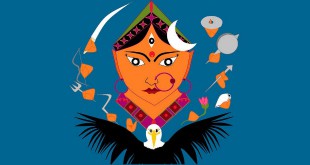