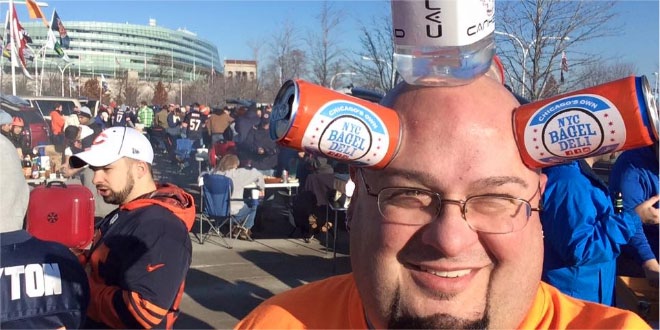 EVERGREEN PARK, Illinois, USA – January 30, 2016 – Jamie Keeton, 47, of Evergreen Park, who shows off his strange abilities under the name Canhead Keeton, has a medical condition that causes cans, bottles and other objects to stick to his skin; he recently set the World Record for the number of cans stuck to a person’s head, after sticking eight cans to his head.

Photo: Jamie “Canhead” Keeton, 47, has a medical condition that causes cans, bottles and other objects to stick to his skin.

The Guinness World Records world record for the most canned drinks opened by a parrot in one minute is 35 and was achieved by Zac the Macaw in San Jose, California, USA, on 12 January 2012.

Guinness World Records also recognized the world record for the largest gathering of people wearing head boppers is 465, and was achieved by Castle Park (USA) in Riverside California, USA, on 28 March 2015.

He can stick virtually anything to his skin except clothing and textiles. He’s one of only a handful of people in the world known to have this rare skin condition.

More than 20 years ago at a ballgame, Keeton discovered that his skin acts like a suction cup. He placed a cold can against his head to cool off, and then he was distracted by a foul ball.

“Where did my can go?” he asked friends, who saw the can stuck to the back of his head.