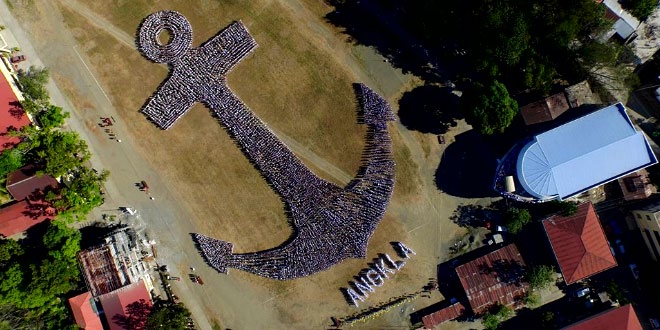 Photo: Students of the University of Antique-Sibalom Campus formed an image of an anchor as they vied for a World Record for the world’s largest human anchor formation. Around 6,000 thousand students and teachers formed the anchor, which is a symbol of seafarers.

The Guinness World Records world record for the largest human car image consists of 328 participants and was achieved by FCA ITALY S.P.A. (Italy), in Milan, Italy, on 4 July 2015.

Guinness World Records also recognized the world record for the largest human mobile was made up of 105 people from Target Cranes, The Stunt Company, Bellville Fire Dept. and the Fire Brigade of Boland Mun, in the grounds of Horizon House, Stellenbosch, South Africa on 3 November 2007.

In a statement on its official website, the university said the anchor formation was part of its 62nd founding anniversary, with the theme “UA: Strongly Anchored on Quality Assurance,” and a response to a challenge of Angkla party-list group.

“This is evidence that everything is possible if we work together,” Angkla vice chairman Capt. Ronald Enrile was quoted as saying.

The activity was part of the 62nd Foundation Day celebration of the university.

“This feat will surely put UA on the world map and will be remembered until one community breaks our record,” Capt. Geronimo Dolor, College of Maritime Studies dean, said.