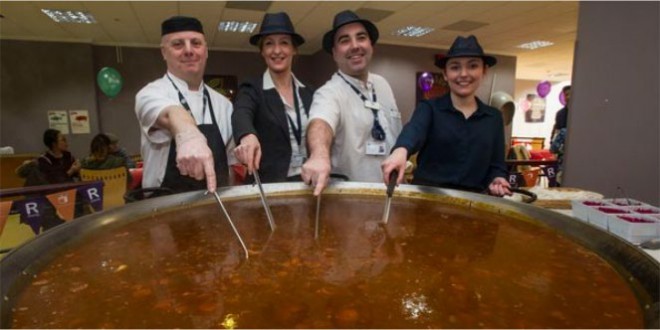 The Guinness World Records world record for the largest macaroni and cheese weighed 1,119.91 kg (2,469 lbs) and was made by Cabot Creamery Cooperative and Chef John Folse & Company (both USA) in Fulton Square in New Orleans, Louisiana, USA on 23 September 2010.

Guinness World Records also recognized the world record for the most different dishes on display is 5,845 and was achieved by Kraft Foods Philippines at Araneta Coliseum in Quezon City, Philippines, on 14 December 2009.

The tasty treat was part of a bid raise £10,000 towards the £10millon target to help fund equipment at the new hospital building, which is expected to open in summer 2017.

Lord Mayor of Liverpool Tony Concepcion said: “Scouse is a dish very close to the heart of the people of Liverpool, especially in the chilly month of February.

“This is a wonderful opportunity to serve up steaming dishes of scouse to patients, families and supporters of R Charity at the Royal Liverpool University Hospital, and fundraise to make the new Royal even better.”

Aidan Kehoe, chief executive of Royal Liverpool and Broadgreen University Hospitals NHS Trust, said: “This is the launch of our month long Scouse at R House, fundraising campaign. So come along to see how it’s done and get inspired to hold your own event and help us reach our £10m target to offer patients facilities beyond those that NHS funds can provide.”