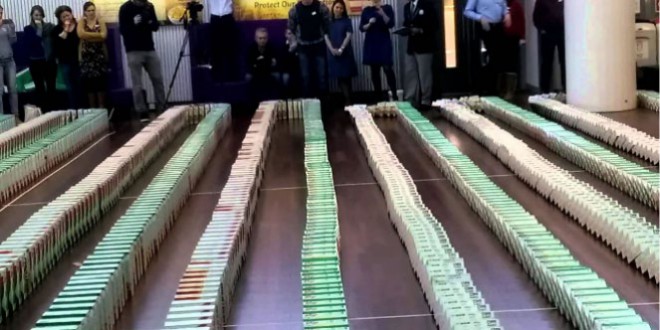 Manchester, UK – February 2, 2016 – Kellogg’s UK has set a new World Record – a domino-style topple of almost 2,700 packets of breakfast cereal; the record for the Most cereal boxes toppled in a domino fashion was set at the company’s annual employee conference in Manchester.

Guinness World Records also recognized the world record for the largest bowl of cereal weighed 1,000 kg (2204 lb 10 oz)and was made in a bowl measuring 2.6 m (8 ft 6 in) in diameter and 1.5 m (4 ft 11 in) in height. The record was made by Kellogg’s South Africa, Sync Communications and Automatic in Johannesburg, South Africa on 2 July 2007.

Kellogg’s settled on the idea of toppling cereal boxes, and staff at the conference set up and knocked down 2,686 packets of cornflakes to claim the new title.

In line with the World Record guidelines for all food-related record attempts, the cornflakes did not go to waste and were sent to a local foodbank.