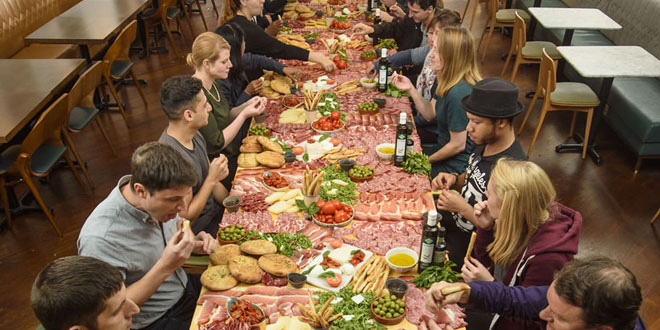 London, UK – October 28, 2016 – To celebrate the launch of their new Autumn menu, ASK Italian put together a board featuring an impressive 16,000g of cured meats, 13,000g of cheese and 13,000g of vegetables, which measured 10 metres long – the entire length of their new-look Gloucester Road restaurant in London, thus setting the new world record for the Largest antipasti board.

Photo: ASK Italian has attempted the World Record for ‘Giantipasti’, the world’s biggest antipasti board, to celebrate the launch of their autumn menu. The attempt saw 62,100g of ingredients used including, 16,000g of cured meats, 13,000g of cheese and 13,000g of vegetables across an antipasti board measuring 10 metres long to set the first ever record of its kind.

Guinness World Records also recognized the world record for the largest pasty; it weighed 728 kg (1,604 lb) and was made by Proper Cornish Food Company on 19th August 2010. The pasty had a traditional ‘D’ shape and was Cornish crimped.

ASK teamed up with world renowned chef Theo Randall and spent three hours building the feast for guests to enjoy.

The board included a range of smoked prosciutto, rosemary & sea salt bread, fioncchiona salami and a variety of Italian cheeses.

Corinne Prior, the Marketing Director of ASK Italian, said “We are so excited to have been the first people to ever attempt a world record sized antipasti. Sharing a ‘Giantipasti’ is a perfect example of our desire to bring people together with food just like the Italians do. We look forward to welcoming everyone to try the new menu.”