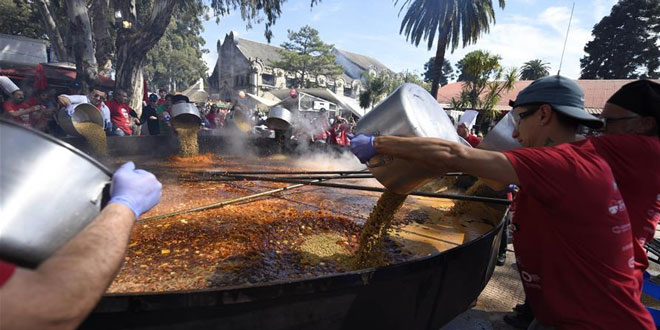 The Guinness World Records world record for the largest lentil stew is 2,365 kilograms (5,213 lb 15 oz) and was made by Pontyn S.A. with its brand Emigrante (Uruguay) in Montevideo, Uruguay, on 13 September 2015.

Guinness World Records also recognized the world record for the largest fish stew; it weighs 3,804 kg (8,386 lb) and was made by the Tourist Organisation of the Municipality of Prnjavor (Bosnia-Herzegovina) in Prnjavor, Bosnia-Herzegovina on 19 August 2014.

Simmering for two and a half hours in a pot of 5 meters in diameter, the stew consisted of 150 kilos of meat, bacon and chorizo, 600 kilos of lentils, 350 kilos of potatoes, 115 liters of tomato puree, 65 kilos of onion, 60 liters of oil, 13 kilos of salt and 3 kilos of paprika and oregano, to make the biggest stew, expected to provide some 12,000 servings.

The project, promoted by Daniel Rama, director of the food distributor Emigrante, was the central attraction at the 111th International Exhibition of Livestock and Agro Industrials (Expo Prado), an important tradition in this South American country.

The Uruguayan notary public in charge of monitoring the preparation of the dish, Analia Canepa, certified its weight at 2,365 kilos (5,200 pounds) of stew.

The organizers expect to shelve out about 12,000 servings, which will be sold for 50 pesos ($ 1.70) each and the profits will go to the Telethon Foundation of Uruguay, dedicated primarily to rehabilitation of children and adolescents with neuro-musculoskeletal disorders.