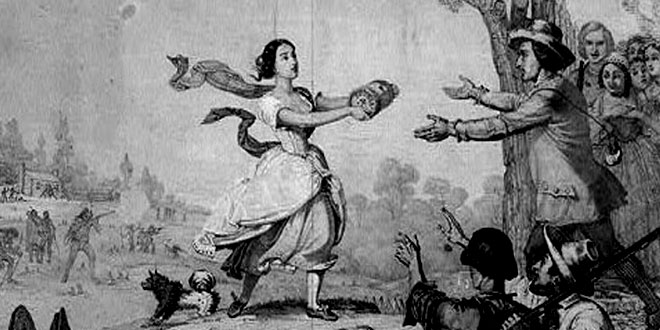 In the autumn of 1777 the English decided to attack Fort Henry, at Wheeling, in northwestern Virginia. This was an important border fort named in honor of Patrick Henry, and around which had grown up a small village of about twenty-five log houses.

A band of Indians, under the leadership of one Simon Girty, was supplied by the English with muskets and ammunition, and sent against the fort. This Girty was a white man, who, when a boy, had been captured by Indians, and brought up by them. He had joined their tribes, and was a ferocious and bloodthirsty leader of savage bands.

When the settlers at Wheeling heard that Simon Girty and his Indians were advancing on the town, they left their homes and hastened into the fort. Scarcely had they done so when the savages made their appearance.

The defenders of the fort knew that a desperate fight must now take place, and there seemed little probability that they would be able to hold out against their assailants. They had only forty two fighting men, including old men and boys, while the Indian force numbered about five hundred.

What was worse they had but a small amount of gunpowder. A keg containing the main supply had been left by accident in one of the village houses. This misfortune, as you will soon see, brought about the brave action of a young girl.

After several encounters with the savages, which took place in the village, the defenders withdrew to the fort. Then a number of Indians advanced with loud yells, firing as they came. The fire was returned by the defenders, each of whom had picked out his man, and taken deadly aim. Most of the attacking party were killed, and the whole body of Indians fell back into the near-by woods, and there awaited a more favorable opportunity to renew hostilities.

The men in the fort now discovered, to their great dismay, that their gunpowder was nearly gone. What was to be done? Unless they could get another supply, they would not be able to hold the fort, and they and their women and children would either be massacred or carried into captivity.

Colonel Shepherd, who was in command, explained to the settlers exactly how matters stood. He also told them of the forgotten keg of powder which was in a house standing about sixty yards from the gate of the fort.

It was plain to all that if any man should attempt to procure the keg, he would almost surely be shot by the lurking Indians. In spite of this three or four young men volunteered to go on the dangerous mission.

Colonel Shepherd replied that he could not spare three or four strong men, as there were already too few for the defense. Only one man should make the attempt and they might decide who was to go. This caused a dispute.

Just then a young girl stepped forward and said that SHE was ready to go. Her name was Elizabeth Zane, and she had just returned from a boarding-school in Philadelphia. This made her brave offer all the more remarkable, since she had not been bred up to the fearless life of the border.

At first the men would not hear of her running such a risk. She was told that it meant certain death. But she urged that they could not spare a man from the defense, and that the loss of one girl would not be an important matter. So after some discussion the settlers agreed that she should go for the powder.

The house, as has already been stated, stood about sixty yards from the fort, and Elizabeth hoped to run thither and bring back the powder in a few minutes. The gate was opened, and she passed through, running like a deer.

A few straggling Indians were dodging about the log houses of the town; they saw the fleeing girl, but for some reason they did not fire upon her. They may have supposed that she was returning to her home to rescue her clothes. Possibly they thought it a waste of good ammunition to fire at a woman, when they were so sure of taking the fort before long. So they looked on quietly while, with flying skirts, Elizabeth ran across the open, and entered the house.

She found the keg of powder, which was not large. She lifted it with both arms, and, holding the precious burden close to her breast, she darted out of the house and ran in the direction of the fort.

When the Indians saw what she was carrying they uttered fierce yells and fired. The bullets fell like hail about her, but not one so much as touched her garments. With the keg hugged to her bosom, she ran on, and reached the fort in safety. The gate closed upon her just as the bullets of the Indians buried themselves in its thick panels.

The rescued gunpowder enabled the little garrison to hold out until help arrived from the other settlements near Wheeling. And Girty, seeing that there were no further hopes of taking Fort Henry, withdrew his band.

Thus a weak but brave girl was the means of saving strong men with their wives and children. It was a heroic act, and Americans should never forget to honor the name of Elizabeth Zane.

John Esten Cooke – Born in Winchester, Virginia, he was noted for writing about that state. He illustrated Virginia life and history in the novels, The Virginia Comedians (1854), and The Wearing of the Gray, a tale of the American Civil War, and more formally in a respected Virginia history. His style was somewhat high-flown. He was the author of The Youth of Jefferson.

Cooke was one of 13 children of John Rogers Cooke and Maria Pendleton Cooke. He was born on the family’s plantation, “Amber’s Hill,” near Winchester, Virginia, in the Shenandoah Valley. At his father’s urging, he studied and practiced law briefly in Richmond. He abandoned that in 1854 after his father’s death, and almost immediately became a successful novelist and prolific short story writer, eventually authoring 31 books and almost 200 published articles and poems. Cooke joined the Richmond Howitzers, a militia artillery unit, in the 1850s, earning the rank of sergeant.