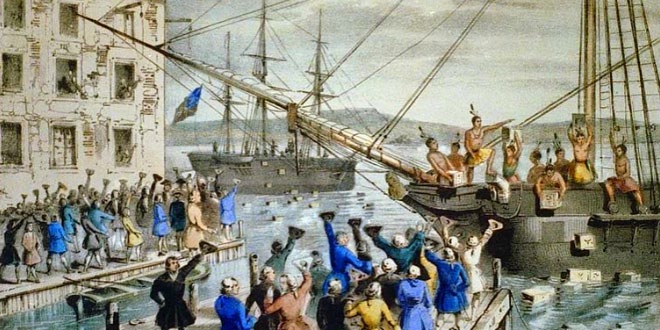 On November 29, 1773, there arrived in Boston Harbor a ship carrying an hundred and odd chests of the detested tea. The people in the country roundabout, as well as the town’s folk, were unanimous against allowing the landing of it – but the agents in charge of the consignment persisted in their refusal to take the tea back to London. The town bells were rung, for a general muster of the citizens. Handbills were stuck up calling on “Friends! Citizens! Countrymen!”

Mr. Rotch, the owner of the ship, found himself exposed not only to the loss of his ship, but to the loss of the money value of the tea itself, if he should attempt to send her back without clearance papers from the custom house – for the admiral kept a vessel in readiness to seize any ship which might leave without those papers. Therefore, Mr. Rotch declared that his ship should not carry back the tea without either the proper clearance or the promise of full indemnity for any losses he might incur.

Matters continued thus for some days, when a general muster was called of the people of Boston and of all the neighboring towns. They met, to the number of five or six thousand, at ten o’clock in the morning, in the Old South Meeting House – where they passed a unanimous vote THAT THE TEA SHOULD GO OUT OF THE HARBOR THAT AFTERNOON!

A committee, with Mr. Rotch, was sent to the custom house to demand a clearance. This the collector said he could not give without the duties first being paid. Mr. Rotch was then sent to ask for a pass from the governor, who returned answer that “consistent with the rules of government and his duty to the king he could not grant one without they produced a previous clearance from the office.”

By the time Mr. Rotch returned to the Old South Meeting House with this message, the candles were lighted and the house still crowded with people. When the governor’s message was read a prodigious shout was raised, and soon afterward the moderator declared the meeting dissolved. This caused another general shout, outdoors and in, and what with the noise of breaking up the meeting, one might have thought that the inhabitants of the infernal regions had been let loose.

That night there mustered upon Fort Hill about two hundred strange figures, SAID TO BE INDIANS FROM NARRAGANSETT. They were clothed in blankets, with heads muffled, and had copper colored countenances. Each was armed with a hatchet or axe, and a pair of pistols. They spoke a strange, unintelligible jargon.

They proceeded two by two to Griffin’s Wharf, where three tea-ships lay, each with one hundred and fourteen chests of the ill-fated article on board. And before nine o’clock in the evening every chest was knocked into pieces and flung over the sides.

Not the least insult was offered to any one, save one Captain Conner, who had ripped up the linings of his coat and waistcoat, and, watching his opportunity, had filled them with tea. But, being detected, he was handled pretty roughly. They not only stripped him of his clothes, but gave him a coat of mud, with a severe bruising into the bargain. Nothing but their desire not to make a disturbance prevented his being tarred and feathered.

The tea being thrown overboard, all the Indians disappeared in a most marvelous fashion.

The next day, if a stranger had walked through the streets of Boston, and had observed the calm composure of the people, he would hardly have thought that ten thousand pounds sterling of East India Company’s tea had been destroyed the night before.