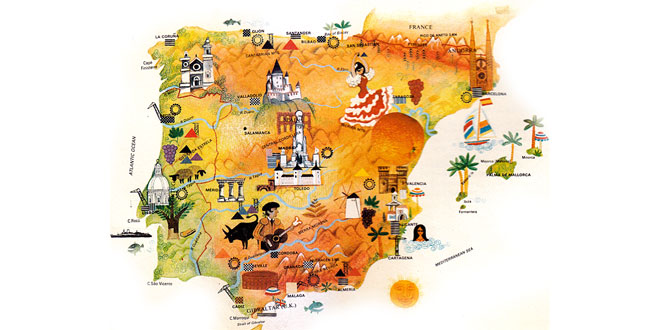 Spain consists mostly of a high tableland, or Meseta, which bounded and crossed by various mountain ranges. The Cantabrian Mountains are in the north-west and the Pyrenees rise along the French border. But Spain’s highest range, the Sierra Nevada, which contains the highest peak Mulhacen, is in the south-east. The central Meseta is crosses by a series of sierras (ridges). Fertile lowlands occur in river valleys (vega), including the northern Plain of Aragon drained by the Ebro River, and on the Mediterranean coasts (huerta). The most fertile region is the Plain of Andalusia drained by the Guadalquivir River in the south-west. Most Spanish rivers, like the Guadalquivir which is navigable up to Sevilla (Seville), drain into the Atlantic. A smaller number flow into the Mediterranean. In the north, fast flowing rivers are harnessed to generate hydroelectric power. Those in the south provide water for irrigation projects.

Forests cover about 26 million hectares. Deciduous forests predominate in the north, but they give way to conifers at higher levels. The arid interior supports drought-resistant grasses and shrubs. The common esparto grass is used in making matting, hats, sandals, baskets and even rope. The Mediterranean coast-lands support macchia (the equivalent of the French maquis), cork oak, olive tress and so on. Typical wild animals include porcupines, genets and numerous rodents. Many species have become extinct in the last few hundred years. Some deer, ibex, Spanish lynx and wild boar are now protected in special reserves.

Farming, forestry and fishing contribute about six per cent of the gross domestic product and employ 14 per cent of the work-force. Almonds, barley, cotton, oats, grapes (especially for wine making), lemons, nuts, olives, oranges, sugar beet, tangerines, tobacco and wheat are among the leading crops. Sheep are grazed in the uplands, and cattle, pigs and poultry are reared in other regions. Bee-keeping and silkworm-breeding are other significant activities. Sardines are the most important catch of the fishing fleet, which employs more than 100,000 people.

The leading industrial sector is engineering, which produces cars and lorries, mining and drilling equipment, electrical engineering products, and so on. Shipbuilding is also important. Textiles and processed foods are leading light industrial products. Spain exports machinery and transport equipment. It is also known for its wines, fruits, tinned fish and olive oil.

Spain has a fairly good transport system, but it is not particularly dense. Road and rail construction in the interior uplands is costly. However, the motorway system is expanding rapidly. Many cities are linked by air. Shipping is also important. The chief ports are Barcelona, Spain’s most industrialized city, Valencia, Malaga, Cadiz, Santander and Bilbao. The capital, Madrid occupies a central position in the country. It is a magnificent city, with many old palaces and churches with art treasures.

Spain has experienced a boom in the tourist trade in the last 30 years. In 1982, 42 million tourists visited Spain, making the tourist trade a major source of foreign currency. Apart from the mainland resorts, the Canary Islands in the Mediterranean are major resort centres.

In 1981 Spain had a per capita gross national product of US $5,640, which is fairly low by European standards. However, Spain has been developing quickly in recent years. In the early 1980s both Spain and Portugal applied for membership of the European Economic Community in the hope that it would stimulate economic development.