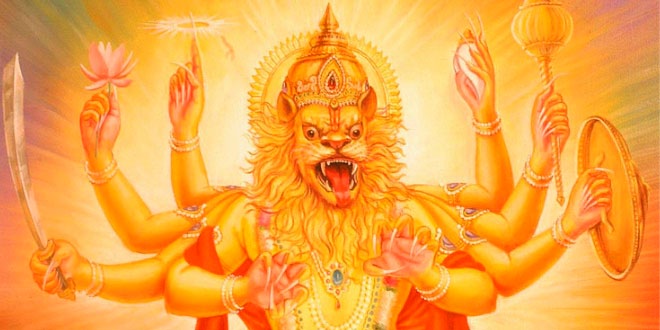 Simha Sankranti marks the day when the sun moves from Karka Rashi (Cancer) to Simha (Leo). It marks the beginning of Malayalam calendar in Kerala. Similarly, Avni Masam begins in the Tamil month on this day.

It’s is a day of worship. Devotees offer their prayers to the Sun God, Lord Vishnu and Lord Narsimha Swami on this occasion. Vishnumurthy Temple situated at Kulai near the city of Mangalore (Karnataka) is specially decked up for the festivities.

Narikela Abhishekha which is considered to be a holy bath is specially performed on this occasion. Specially cleansed coconut water is used for Narikela Abhishekha. Appada Pooja to please Lord Ganesh is performed and offerings in form of Hoovina Pooja are made to Lord Vishnumurthy on this occasion and the celebrations continue till Kanya Sankraman.

The festival is celebrated in temples across Kerala, Karnataka, Tamil Nadu, Andhra Pradesh and Telangana.

Though it is celebrated primarily throughout the Southern States of India, it is also celebrated in the Kumaun belt of Uttarakhand. It is usually believed that during the reign of the Chand dynasty, artisans displayed their products in the palace on Simha Sankranti. They were suitably rewarded by the King for their efforts. Common people of the dynasty too became a part of these celebrations and offered fruits and flowers to the members of royal family. This tradition of offering fruits and other offerings to the members of royal family was known as Rite of Olag.

The tradition of offering gifts on occasion of Simha Sankranti is much similar to the traditions of Christmas when exchanging gifts is considered good. Bread made from horse bean poured with butter and ghee was consumed throughout the Kumaun region on this day. The widespread use of ghee on the occasion of Simha Sankranti has earned it the pseudo name of Ghrit Sankranti in Bageshwar region of Kumaun in Uttarakhand.

Sankranti in general signifies the movement of Sun from one Rashi to the other. Simha Sankranti as other Sankranti festivals is unique as one is able to expel out darkness from the life on the occasion of Simha Sankranti and usher in an era of prosperity. Devotees who offer traditional offerings to the Sun God, Lord Vishnu and Lord Narsimha Swami, are blessed with a dignified life.

The festivities are celebrated with religious devotion and devotees seek the blessings of God on this occasion.