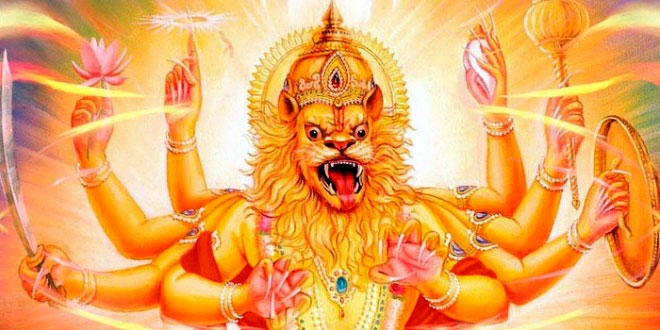 Narsingh Chaturdashi or Narsimha Chaturdashi is mainly observed to celebrate victory of good over evil. It is believed that on this very great day, Lord Narasimha appeared for rescue of Dharma and Bhakti personified in Prahlada Maharaja.

Generally this day is celebrated with fasting and worshiping the lord with the abhisheka and archana at dusk. Rituals are followed by sankeertana and hari naam parayana.

Shri Narsingh God Temple, The temple situated in village Tadawas, Chomu, Jaipur Rajasthan, India. Narsingh god is an avatar of the Hindu god Vishnu. This is celebrated as Narasimha Jayanti.

Thousands of people gather from nearby villages to enjoy Narsingh Leela. Narsingh Avtar and Varah Avtar are main attractions of the Leela.

Special food preparations for this day are Panaka (Cool sweet drink made out of sugar tulsi leaves mint and Khas), wet Mooong and chana along with seasonal fruits are specialty of the day.

These are offered as Prasad and then distributed among devotees.

Lord Narsimha is an incarnation of Lord Vishnu as described in ancient religious text. Lord Narshimha is also considered one of Hinduism‘s most popular deities. He is often visualized as half-man / half-lion, having a human-like torso and lower body, with a lion-like face and claws. He is popularly known as ‘Great Protector’ who specifically defends his devotees in times of need.