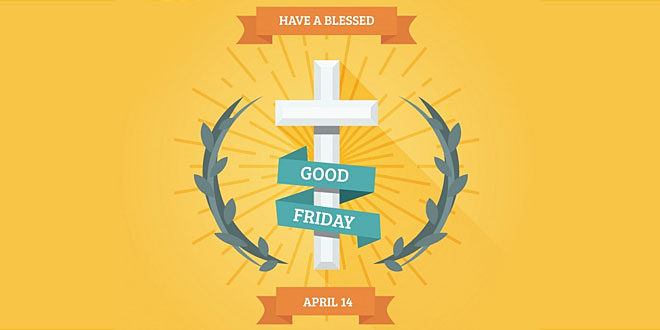 Good Friday is celebrated in April-May by the Christians in India to commemorate the crucifixion of Jesus Christ. Lord Christ sacrificed himself on the cross for the sake of entire humanity. On this day Christians mourn Christ’s death and observe strict fast, and attend the services in the churches.

Then the whole company of them arose and brought him before pilate. And they began to accuse him saying, “We found this man preventing our nation, and forbidding us to give tribute to Caesar, and saying that he himself is Christ a King”… Pilate then said to them, “…Behold nothing deserving death has been done by him, I will therefore chastise him and release him.”

But they all carried out together “Crucify him!” They led him away. Two others also, who were criminals, were led away to be put to death with him. And Jesus said, “Father forgive them; for they know not what they do”. It was now about the sixth hour and there was darkness over the whole land until the ninth hour, while the sun’s light failed, and the curtain of the temple was torn into two. Then Jesus crying with a loud voice, said, “: Father, into thy hands I commit my spirit!” And having said this he breathed the last.

Christians mourn on Good Friday and pray to express their love, faith and deep devotion in Jesus Christ. Some Christians wear black clothes to symbolize mourning and take out a procession with an image of Jesus Christ and go to the burial place.