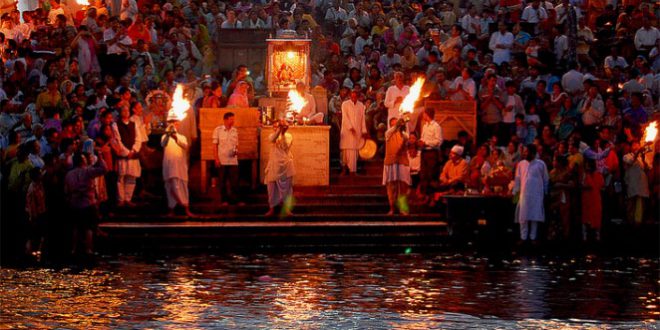 Ganga Saptami is a Hindu festival celebrated mostly in Northern parts of India. It is also known as Ganga Pujan or Ganga Jayanti. It is believed that on this day the day the holy river Ganga descended onto the earth. This day falls on the seventh day of the Shukla Paksha in Vaisakha month.

River Ganges is considered to be the most holy and sacred river in India. This festival is mainly celebrated in the places the river Ganga and its tributaries flow. On this day devotees take a holy dip in the Ganges. It is considered to be very auspicious.

People worship Goddess Ganga and offer several pujas and rituals on this day. ‘Ganga Aarti’ is held at several ghats of the Ganges. ‘Ganga Shobha Yatra’ is organized at various ghats and many people take part in it. Devotees perform ‘deepadan’ on this auspicious occasion.

There is an interesting story associated with the rebirth of Ganga. Once upon a time there lived a king called Sagara who ruled the kingdom of Kosala. He belonged to the Surya Dynasty and performed hundred ‘Aswamedha Yagnas’. Once he successfully completes the hundredth yagna, he would become the king of Swargalok.

Indra, the king of heaven did not want this to happen. In order to make his position secure, he had stolen the sacrificial horse of the hundredth Yagna and hid it in the ashram of Sage Kapila. The sons of Sagara, about sixty thousand of them set out in search of the horse and finally could find it in sage Kapila’s ashram. They mistook him to be the culprit and waged a war against him. The sage became furious, cursed all of them and burnt them to ashes.

Time rolled on. Many kings took birth and died in the same dynasty. One among them was Bhagiratha. By the time he ascended the throne, there were many disturbances in Kosala. He thought that these are due to the multiplication of his fore father’s sins and wanted to do penance for their sins. This can be done only through River Ganga which is sacred. Then Bhagiratha went to Himalayas and did tapasya for thousand years to please Lord Brahma.

Lord Brahma appeared in front of the king and promised him that Goddess Ganga will be sent to earth as he wished. But when she would descend, she would have a strong flow and would destroy the whole earth. Hence Lord Brahma asked the king to please Lord Shiva who could control the river’s force. This time the king did tapasya for Lord Shiva for a year and finally Lord Shiva agreed to help him. He opened his hair and tied Ganga when she was falling from the heaven. This day came to be celebrated as Ganga Saptami Day.

Then Lord Shiva let only a part of her to flow through Himalayas. Ganga which came to earth due to king Bhagiratha’s efforts is also known as Bhagirathi. During the course of her flow, she washed out sage Jahnu’ ashram. Then the raged sage drank the whole water. When Bhagiratha pleaded the sage, he released her through his ear. This day is known as ‘Jahnu Saptami.’

Later river Ganga came to be known as Jahnavi, the daughter of sage Jahnu. From the Himalayas she continued her journey and reached Sage Kapil’s ashram and flowed over the ashes of sixty thousand princes. Then they all attained ‘Moksha‘ and this day is considered as ‘Ganga Dussehra.’