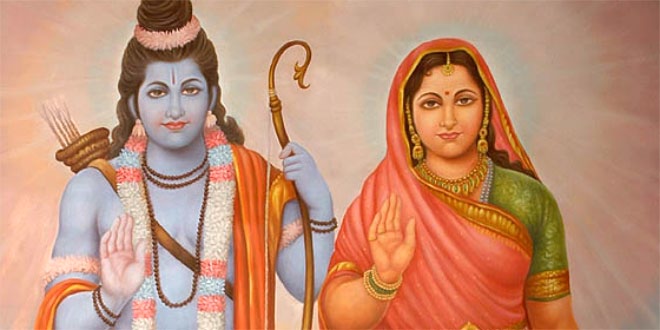 Sita Navami (Janaki Navami): Goddess Lakshmi took birth as Sita in Treta yug in the kingdom of Mithila* and the this birth anniversary is celebrated as Sita Navami. This festival is also known as Sita Jayanti. In some parts of India it is also called Janaki Navami. Maa Sita was also known as Janaki because she was the daughter of Janaka, the king of Mithila.

Mithila, also known as Tirhut and Tirabhukti, is a geographical and cultural region of the Indian subcontinent bounded by the Mahananda River in the east, the Ganges in the south, the Gandaki River in the west and by the foothills of the Himalayas in the north. It comprises certain parts of Bihar and Jharkhand of India and adjoining districts of the eastern Terai of Nepal. The native language in Mithila is Maithili, and its speakers are referred to as Maithils.

Sita Navami is celebrated on the Navami tithi (9th day) of the Shukla Paksha in the Hindu month of Vaishakha month because Maa Sita was born on Navami and  married to Lord Rama who was coincidentally  born on the same tithi (day) during the Shukla Paksha of the Chaitra month. Vaishnavites celebrate this festival during Krishna Paksha of Phalgun month or Magh month. According to the Hindu calendar this festival falls exactly a month after Sri Rama Navami.

An Indian Hindu woman worships many  Gods and Goddesses for the long life of her husband. She also prays that she should be a sumangali through her life i.e., die before her husband. One among such pujas is the Sita Navami Vrat.  Married women worship Goddess Sita along with Lord Rama and Lakshmana. They make a four pillar puja mandap in their homes and decorate the mandap with colorful flowers. Then they install the idols of Lord Sri Rama, Maa Sita, King Janaka and Mata Sunayana in the mandap. A plough and Goddess Earth are also placed in the mandap and are worshiped. Rice, til and barley are offered to the gods and goddesses during this puja. Women fast on this day.

Lord Rama and Maa Sita are considered to be the ideal couple. Though they faced many hurdles in their life they were very firm as far as their relationship was concerned. Maa Sita is known for her sincerity and purity. Hence women take her as an inspiration and celebrate this vrat with lot of dedication. They believe that their married lives will be at peace, filling their homes with lot of happiness and joy.

This festival is celebrated all over India with great enthusiasm. In most of the temples Maha-abhishek, Sringar Darshan and Arati are performed. The idols of Lord Rama, Maa Sita, Lakshmana and Hanuman are taken in processions on this day and Bhajans are sung and Ramayana is recited in temples.

There are a few interesting stories regarding the birth of Maa Sita. When king Janaka was ploughing a field for performing a Yagna, he found a baby girl in the golden casket under the layers of earth. He believed that she was a divine gift to him and accepted her as his daughter. This is how Goddess Lakshmi took birth in Janaka’s house. Because Sita emerged from the Goddess earth, a plough is worshiped on Sita Navami.

Another legend says that Sita is a rebirth of Vedavati. Vedavati was a beautiful woman who gave up all worldly things, became a hermit and meditates for Lord Vishnu. This is when King Ravana sees her, gets attracted and tries to violate her. To escape from him, she jumped into a fire and before dying cursed him that she would be responsible for his death in the next birth.