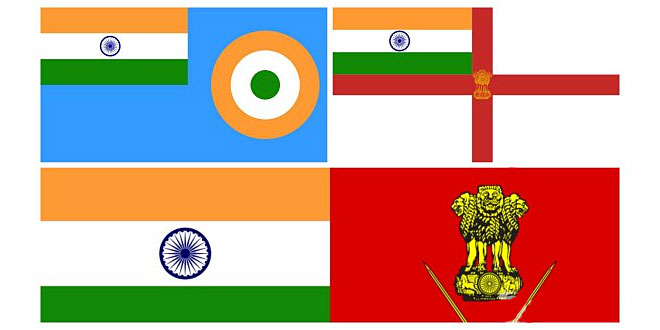 The Armed Forces Flag Day is celebrated all over India every year on 7th of December in order to collect the funds from people all around the country for the well being of the staff of the Indian Armed Forces. It was first celebrated in India on 7th of December in the year 1949. Since 1949, it has become a ritual in order to memorialize this day in the great honour of the soldiers, sailors and airmen of the India. It is enthusiastically celebrated throughout the country intending to tribute the courageous and martyred soldiers, to salute the expert soldiers as well as to refurbish the harmony of citizens.

Jawaharlal Nehru, who was then Prime Minister of India, on December 7, 1954 said:

A few weeks ago, I visited Indo-China and saw our officers and men attached to the International Commission there. It gave me a thrill to see their smart bearing and the good work they were doing in that distant land. What pleased me still more was their general popularity with the people there. By their efficiency as well as their friendliness, they enhanced the reputation of India. Among them were people from all parts of India. They observed no provincial or other differences amongst themselves. I am sure my countrymen will be pleased to learn of them and would like to indicate their appreciation of these young men who serve our country both here and elsewhere so well. A way to indicate that appreciation is to contribute to the Flag Day Fund.

Why the Celebration is named as the Armed Forces Flag Day?

This event celebration is named as Armed Forces Flag Day as this day aimed to collect fund from the people throughout the India just by selling the Indian special colorful flags, labels and stickers. Now it has become a prestigious annual celebration in India for the well-being of the National life, providing rehabilitation to the battle victims, well-being of helping personnel of Armed Forces and their families as well as the resettlement and welfare of the ex-servicemen personnel and their families.

The personnel serving in the Navy, Army and Air Force of India never think about their lives while protecting the country. Many lives of the Indian army personnel had lost all through the Chinese violence of the year 1962, Indo-Pak Conflict of the year 1965 and 1971, Kargil War of the year 1998 and many more. Many homes of the India had left broken during these wars, number of serving personnel became disabled, handicapped. So, this Flag Day celebration in India bring a lot of hope in the lives of those victims who had sacrificed their precious lives for the better tomorrow of the country.

The Armed Forces Flag Day celebration strengthens the cultural bond among the people of India and the staffs of armed forces. This celebration plays a great role in enhancing the welfare of the serving personnel of Indian armed forces.

The First World War, which is celebrated every year as an Armistice Day on 11th of November, was named as Poppy Day because the souvenirs of poppies were operated to benefit the ex army men as well as their relatives. But this day was incompatible for freedom of the country. So, after getting the freedom from British authority, the Indian Government had decided to pay attention towards the army men and their relatives.

The Ministry of Defense had decided under the special commission of 28th of August 28 in 1949 that a Flag Day would be celebrated annually on 7th of December to collect fund from the common public by selling the India flags for the well-being of the staff of armed forces. Army men in India perform their duty for the safety and security of the Indian people so it is also the duty of common people towards the army men who are ready to sacrifice their lives in the battle.

Importance and Objectives of Armed Forces Flag Day in India

Armed Forces Flag Day in India is celebrated yearly to remember all the sacrifices of the personnel of Army, Air Force and navy towards the country. This event is organized to get the common public collaboration and support throughout the country for the following purposes:

During the celebration of this event common people and volunteer go for the collection of donations by selling the coupon flags or car stickers all through the India. The common aim of this day is to elevate the fund collection from the general public or potential donors in various ways. All the funds collected at this day are used for the well being of the staffs of the Indian Armed Forces. Flag Day is also observed to memorize their difficult duties, sacrifices as well as pay honor to the brave and martyrs army men of the country.

How it is celebrated?

During the celebrations of Armed Forces Flag Day the staff from the Indian Military (the Indian Air Force, the Indian Army, the Indian Navy) arrange a variety of traditional and cultural programs, plays, festivals, and various pleasure activities to show to the general people of India about their safety.

The Indian Military personnel take part in distributing the Indian small and colorful flags or vehicle flags (red, deep blue, light blue denoting the three divisions of Indian Army) throughout the country. Courageous and brave fighters represents to the common people that how they have sacrificed their lives to protect the normal lives of the country.

The Armed Forces Flag Day Fund was first set up in the year 1949 by the committee of Defense Minister. All the related welfare funds (Funds for war bereaved, Kendriya Sainik Board fund, ex-servicemen or serving personnel of armed forces, Flag Day fund, Indian Gorkha ex-servicemen’s welfare fund, war disabled and etc.) were combined to make a single Armed Forces Flag Day fund in the year 1993 by the Defense Ministry of India.

Local arms of the Kendriya Sainik Board (as element of the Defense Ministry) manage the fund collection all through the country, which is part of the Ministry of Defense. It is operated by the managing committee and organized by both the official and non-official voluntary organizations.