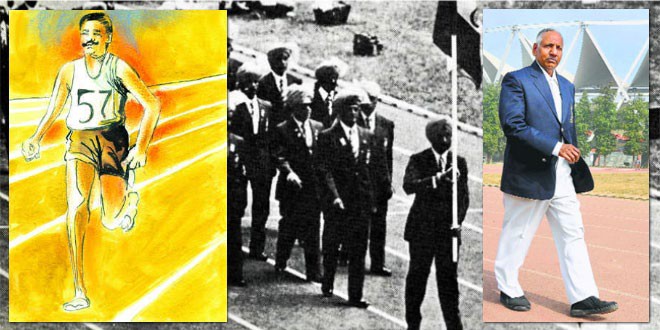 Hari Chand sits at Café Coffee Day, a stone’s throw away from the Jawaharlal Nehru Stadium in New Delhi. Inside the enormous belly of the stadium is a tartan track. Hari Chand has an unrealised dream there. If fulfilled, it would have made him the undisputed long-distance running champion in India. For a lot of people, who have bothered to track his career, he is still the undisputed long-distance champion. In the creased chapters of the Indian athletic history, he is without a doubt, a legend.
Hari Chand, arguably once one of the greatest Indian athletes ever, is dragging himself across the finish line to stand tall with dignity, courage and valour

Hari Chand needs tea. “It gives relief to the heart,” he says, with a goofy smile that is endearing. He is short, micro-inches shorter than 5’2”. Clad in a pair of white trousers, white shirt, black felt shoes and a blazer dating back to 1975 when he won the Arjuna Award. It’s a 40-year-old blazer with dust that smells of a glorious past; a rich athletic history that most in a nation occupied by smartphones, T20 cricket, intolerance, 100-crore films and perceived communal tussles have simply forgotten. “Yaadein pashmina shawl ki tarah hoti hain,” he says. You wait for the punch line. “Uski taap mein aap sukun ki neend so sakte hain.”

The tea has arrived. It’s the typical modern café tea, and for Hari Chand, it’s downright sinful that in today’s world, hot water, tea bag and a tiny pitcher of milk constitutes tea. He keeps looking at it.

“The best tea was in my village in Ghorewaha. It kept simmering to blend in with milk, tea leaves and gave off an aroma that could awaken a dead man,” he says with a smile that reminds you of an era where a good cup of tea might have solved global issues. Hari Chand’s village Ghorewaha is in Hoshiarpur district.

Hari Chand’s father Jaggu Ram wanted his eldest son to be a wrestler. “Those were the days of the akharas so I guess, he was influenced,” Hari Chand says. For some reason, he used to run fast; and for long periods of time. In the village, he never walked. “I had to reach early and I noticed that I never got tired,” he says. What perplexed him about himself became a passion. Hari Chand was competing at the school and district levels, and suddenly was pitch-forked on the national stage when he won the School Nationals in 1970 running the 1500 m. Then followed the Junior Nationals in Kottyam where he won the 3000 m. Coaches noticed his talent and also that at the end of the run, he was never tired.

The Central Reserve Police Force offered a job as a head constable and he accepted. “The job was important but it was also a good running unit,” explains Hari. He won the gold in the 10,000 m at the All-India Police Meet in Jaipur and then was second to Shivnath Singh, another long-distance legend in the Inter-State in Jaipur. In the Open Nationals in Madurai, he was again second to Shivnath.

Jagmohan Singh, a coach, then was already seeing Hari Chand’s talent and ensured that the CRPF man found himself on his first-ever international flight to Seoul in 1975 for the Asian Track and Field Championships. It was there that he found his momentum picking up the gold in the 10,000m with a timing of 29:12. Shivnath Singh was beaten into second place.