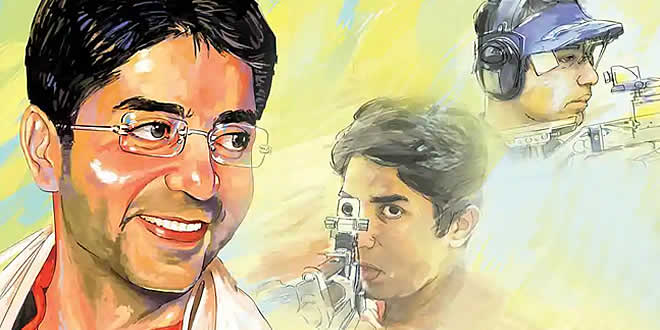 Abhinav Bindra is the brightest star among a new breed of talented Indian shooters. Born on 28 September 1983 to an affluent Punjabi family, Bindra developed the passion for the game at an early age. He became a shooter at the tender age of fifteen. He was the youngest participant at the 1998 Commonwealth Games. Bindra came into limelight by winning a bronze medal in the 2001 Munich World Cup, with a new junior world record score of 597/600 and fetched international accolade to India by winning India’s first individual Olympic gold medal in 2008. Read on to know more about the profile and career of Indian shooter Abhinav Bindra.

Bindra won six gold medals at various international meets in the European Circuit in 2001, which proved to be a purple patch for him. He was conferred the Rajiv Gandhi Khel Ratna Award for the year 2001. In the 2002 Manchester Commonwealth Games, competing in the Air rifle event, Abhinav Bindra bagged Gold medal in the Pairs event and won the Silver medal in the individual event. Despite breaking the Olympic record, Abhinav Bindra failed to secure a medal for India, in the 2004 Athens Olympics. However, on 24 July 2006, he became the first Indian shooter to win a World Championship gold in Zagreb, which was second to Dr. Karni Singh’s, who won a silver medal in 1962 in a World Championship meet. At the 2006 Melbourne Commonwealth Games, he bagged the Gold in the Pairs event, while managed to acquire the third position (bronze) in the Singles event. He, however, missed the 2006 Asian Games at Doha due to an injury at the back.

Abhinav Bindra possesses a lavish indoor range in the backyard of home, which he uses for shooting practice. He has graduated from the University of Colorado in the United States, with a Bachelor’s Degree in Business Administration. Apart from being a professional shooter, he holds the position of the CEO of Abhinav Futuristic – the sole distributor of Walther arms in India. He has sponsorship tie-ups with some of the renowned brands including Samsung and Sahara Group.

Due to excellence in the shooting sport, Abhinav Bindra has been bestowed with some of the most prestigious awards in India. In 2000, he received Arjuna Award, while in 2001 he was entitled to Rajiv Gandhi Khel Ratna, India’s highest sports award. In 2009, he bagged one of the India’s most prestigious civilian award – Padma Bhushan. Apart from the awards, he has been bestowed with cash prizes for winning the gold medal at the 2008 Beijing Olympics.