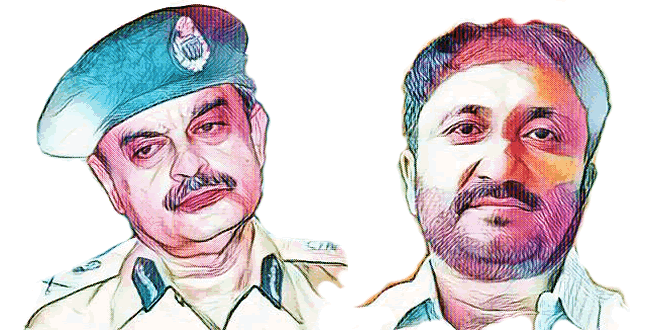 Abhayanand & Anand Kumar – The Ashok Rajpath Street in Patna is where one can find literally hundreds of coaching centers.

It is in fact, a haunt for many young people in Bihar hoping to crack various entrance exams and secure a bright future for themselves.

However, there is another coaching institute in Patna that is a league apart from all these.

The students attending it are mostly poor, are housed, fed and coached for free. And it boasts a success rate of almost 95 per cent in the IIT JEE (IIT stands for Indian Institute of Technology).

It is called the Super 30 and it is run by an IPS officer Abhayanand and a mathematics teacher, Anand Kumar.

Abhayanand, a 1977 batch IPS officer, is currently posted as Inspector General, Economic Offences, with the Bihar government. Two years ago, while coaching his own children for the IIT entrance tests—both IITians now—he thought of the many underprivileged students who didn’t have access to such facilities. Yet many could make it with just a little help. That’s when it occurred that he could start a tutorial for poor rural students.

“I felt it was time for me to pay back to society in some way or the other. I took up the challenge,” recalls Abhayanand.

His idea was seconded by Anand Kumar, a mathematics teacher. He too came from a poor family and was conversant with the struggles of deprived students. Kumar runs his own coaching institute but was keen on the project. In 2002, the duo began Super 30—a free tutorial to coach 30 bright youngsters from underprivileged families of rural Bihar for the IIT entrance test.

Abhayanand, 50, says coaching the students was a challenge but he was confident of success. A BSc physics topper from Patna Science College, the IG spends his free time with the students and says he has had to brush up on his physics before taking on the assignment.

The Super 30 are selected after rigorous screening and aptitude tests. Anand Kumar, who bears the entire expenses, has set aside a part of his house in Mithapur, Patna, for the centre. Food expenses come to Rs 1,000 per month per student. Yet, the frugal lifestyle has not deterred them.

“We wanted to help the children who were intelligent but who did not have enough money to pay the IIT coaching fees as they are quite expensive,” says Anand Kumar. The two of them consulted teachers, principals and schools before short listing their first batch of 30 deserving candidates.

Most of the students who enrolled were the children of marginal farmers and from panchayat schools.

They were brought to Patna, provided food, lodging and coaching under one roof and free of cost.

And the results speak for themselves – when the entrance results for 2003 were announced, 18 of the 30 had made it. And this year, 28 students made it to IITs.

But as a testament to the teaching methodology at Super 30, the students compete not on the basis of caste or quota, but sheer competence.

And every year, battling funds crunch and poaching by rival coaching institutes, Abhayanand & Anand Kumar make sure that at least 30 deserving students like get a shot at making their dreams a reality.