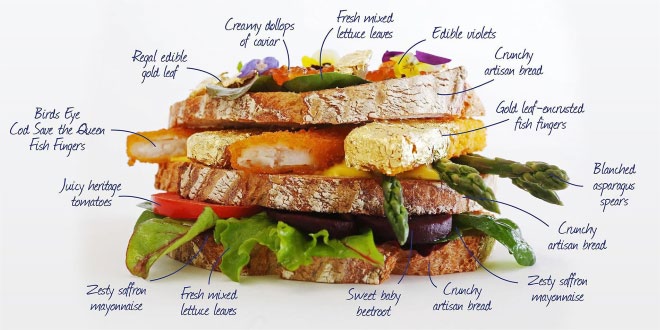 Photo: Birds Eye have created a recipe for the world’s most expensive fish finger sandwich, in celebration of Her Majesty’s 90th birthday. Produced by Birds Eye head chef Peter Lack, the sandwich – which is valued at £187 – contains the world’s most luxurious ingredients including salmon caviar, saffron mayonnaise and edible gold leaf, to complement Birds Eye’s limited edition ‘Cod Save The Queen’ fish fingers.

Other ingredients to complete the fish treat include artisan bread, blanched asparagus spears and a posy of edible violets.

It’s the brainchild of ex-Savoy Hotel Head Chef, Peter Lack, who spared no expense in creating a lunch treat in honour of Britain’s longest reigning monarch.

“Creating a recipe fit for The Queen, using fish fingers, one of the UK’s most-loved products, gave me the chance to be bring a bit of royal flair to Birds Eye,” he said. “Some of the finest ingredients from around the world have been used.”

Birds Eye say the estimated cost of the sandwich to create would be £187.