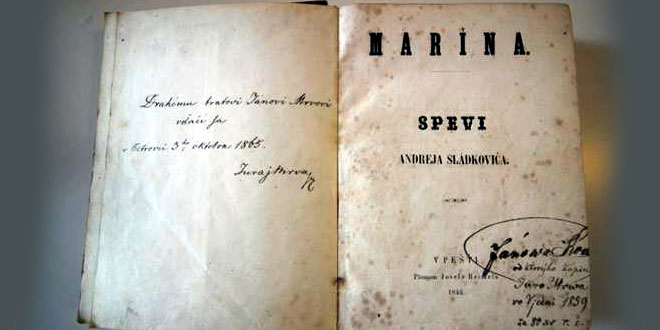 Banská Štiavnica, Slovakia – April 23, 2017 – “Marína” is a great work of a love and reflective poetry in Slovak literature written by Andrej Sládkovič in 1845; the 291 stanzas (2900 lines) long love poem about realistic but unfulfilled love between the author and his muse Marína Pischlová; it sets the new world record for the Longest Love Poem.

The Guinness World Records world record for the oldest surviving love poem is written in a clay tablet from the times of the Sumerians, inventors of writing around 3500 BD, and was called by archaeologists by a very un-romantic name: ‘Istanbul #2461’. The author is unknown but is believed to have been recited by a bride of Sumerian King Shu-Sin, who ruled between 2037 and 2029 BC.

Guinness World Records also recognized the world record for the Poem / literary passage recited in the most languages; it is a six line passage written by Sri Chinmoy and was recited in 203 languages by members of the Sri Chinmoy Oneness-Home Peace Run at the Dag Hammerskjöld Plaza, New York, USA, on 10 April 2014.

“Marína” by Andrej Sládkovič, a 291 stanzas (2 900 lines) long love poem about realistic but unfulfilled love between the author and his muse Marína Pischlová.

“Marína” is a great work of a love and reflective poetry in Slovak literature written by Andrej Sládkovič in 1845.

The first edition of “Marína” was published in 1846. The central themes of the love poem “Marína” are love for a woman, love for a beautiful country Slovakia and love of life in general.

The previous world record for the Longest Love Poem was set by ‘The Evening Star’ written by Romanian poet Mihai Eminescu.

The real love story of Andrej Sládkovič and Marína Pischlová

Andrej Braxatoris from Krupina, student of Evangelical Lyceum and Marína Pischlová met in Banská Štiavnica in 1836.

Andrej Braxatoris, who later accepted artistic name “Sládkovič”, studied at the lyceum for 8 years. He was poor and for that reason he interrupted his studies several times – in order to earn some money.

Although her family was against their love, the couple interchanged their rings. However, their love was not fulfilled.

When Andrej left to study theology to Halle (Germany), unhappy Marína was forced by her mother to marry Juraj Gerzsö – a rich gingerbread maker – in May 1845.

Therefore, owing to this unfulfilled love, Andrej Sládkovič wrote “Marína” – the greatest love poem ever, which sets the world record for the Longest Love Poem.

The house, where Marína Pischlová lived, is located in Banská Štiavnica, Slovak republic and it is national cultural monument. Since December 1993 it is a part of urban reservation registered in UNESCO.

Couples in love come to padlock their Lock of Love on the iron bars of the house, where the greatest Muse of Slovak poetry – Marína Pischlová lived. They throw the keys into the nearby fountain located on the square, so that the locked promise of their love would last forever.