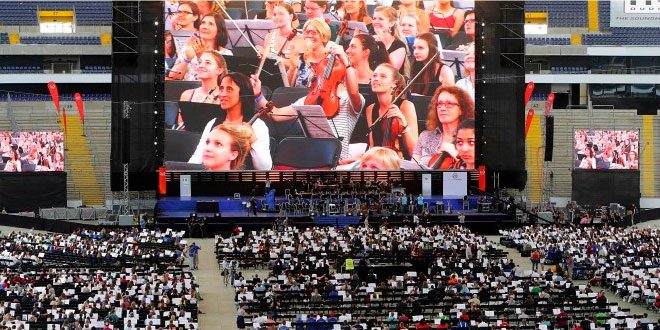 Frankfurt, Germany – July 13, 2016 – 7,548 musicians gathered in a football stadium in Frankfurt to play for 45 minutes, conducted by Wolf Kerschek, setting the new world record for the Largest orchestra.

Photo: 7,548 musicians gathered in a football stadium in Frankfurt to play for 45 minutes, conducted by Wolf Kerschek.

The Guinness World Records world record for the largest orchestra consisted of 7,224 musicians playing a medley of “Waltzing Matilda”, “Ode to Joy” and “We Will Rock You” at the 2013 Queensland Music Festival held at Suncorp Stadium, Brisbane, Queensland, Australia on 13 July 2013.

Guinness World Records also recognized the world record for the largest orchestra playing on recycled materials; it consisted of 1,235 participants and was organised by New Taipei City Government in New Taipei City, Chinese Taipei, on 23 June 2012.

The giant orchestra in Germany performed excerpts from symphonies by Dvorak and Beethoven, including the “Ode to Joy”, as well as a melody from the musical “Starlight Express” and a 1976 pop song by John Miles, “Music (Was My First Love)”.

“The challenge for us as the organizers is to get the musicians to play all at the same time,” Jens Illemann told Reuters.

“We solved this by putting up a 550 square meter (yard) video screen here at the stadium so that our director, Wolf Kerschek will be seen 16 meters (19 feet) tall from every corner of the stadium.

With 7,548 musicians involved, the event trumped the previous biggest such performance in the Guinness Book of Records, set in Brisbane, Australia in 2013, with 7,224 musicians.