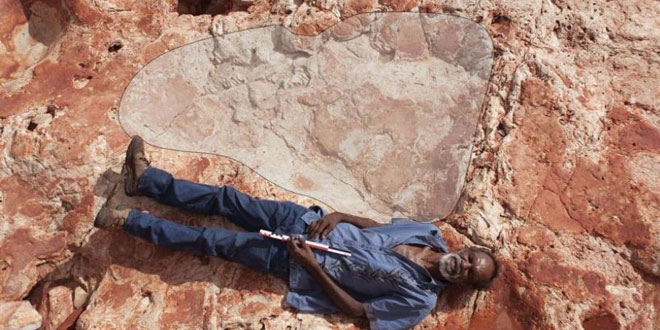 Photo: The biggest dinosaur footprint ever found, measures at about 5 feet 9 inches. A Team of paleontologists from the University of Queensland and James Cook University discovered 21 different types of fossils in area dubbed, ‘Australia’s Jurassic Park’

The Guinness World Records world record for the smallest dinosaur footprint discovered to date measures just 1.78 cm (0.7 in) from the heel to the tip of digit III. it was discovered on the Isle of Skye, Highland, UK by Dr Neil Clark (UK) of the Hunterian Museum of the University of Glasgow, UK, and announced in June 2004.

Guinness World Records also recognized the world record for the tallest mounted dinosaur skeleton; it is that of the Brachiosaurus brancai, which measured 13.27 m (43 ft 6 in) high on 1 June 2007.

A team of palaeontologists from The University of Queensland’s School of Biological Sciences and James Cook University’s School of Earth and Environmental Sciences braved sharks, crocodiles, massive tides and the threat of development to unveil the most diverse assemblage of dinosaur tracks in the world in 127 to 140 million-year-old rocks in the remote Kimberley region of Western Australia.

The footprints, which belonged to a long-necked herbivore called a sauropod, were found by a team of palaeontologists from The University of Queensland and James Cook University.

The research has been published as the 2016 Memoir of the Society of Vertebrate Paleontology.

The tracks were one of 21 specific track types, representing four main groups of dinosaurs, found in the 16-mile stretch of the Dampier Peninsula coastline, dubbed “Australia’s Jurassic Park.”

In a press statement, the study’s lead author Steve Salisbury said that the area holds the most diverse collection of dinosaur tracks in the world, amounting to the “Cretaceous equivalent of the Serengeti.”

“Among the tracks is the only confirmed evidence for stegosaurs in Australia. There are also some of the largest dinosaur tracks ever recorded. Some of the sauropod tracks are around 1.7 m long.”