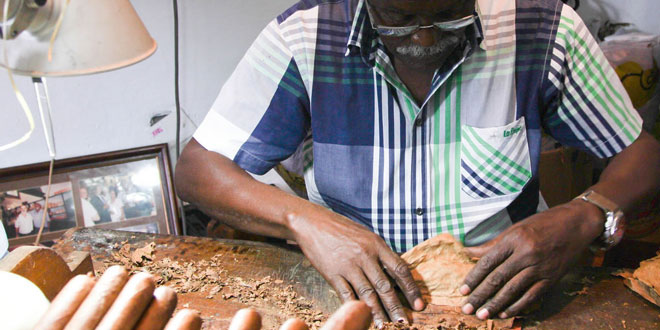 The Guinness World Records world record for the longest cigar measured 81.80 m (268 ft 4 in) and was made by Jose Castelar Cueto (Cuba) at the La Triada shop at Parque Morro-Cabaña in Havana, Cuba, on 3 May 2011.

Guinness World Records also recognized the world record for the most cigar boxes balanced on the chin; it is 223 set by Ashrita Furman (USA) at The Culture Project Theatre, New York City, New York, USA, on 12 November 2006.

Castelar, five-time winner of a World Record, has smashed his previous Guinness World record set in 2011 for an 81.80-metre-long cigar, after eight days of rolling.

In an attempt to set his sixth world record, Castelar, also known as “Cueto,” has used some 80 kg of tobacco leaves, but his greatest achievement may be that at the age of 71 he also cut the amount of time he needed to roll a more than 80-metre cigar by two days.

“I was working on it 10 days, about 12 hours a day. At the end, the cigar was a little more than 90 metres, but we trimmed it to celebrate the 90th birthday of our beloved Comandante,” Castelar said.

Cuba’s most famous cigar roller has been rolling cigars for some 50 years at a factory that now serves as a museum.