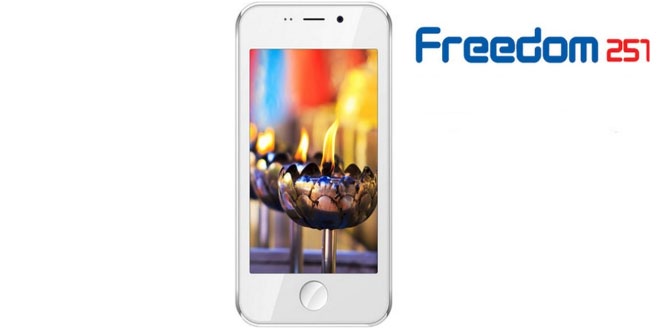 The Guinness World Records’ record for the largest smartphone ensemble is 223 people, in an event organized by Sohu IT and Vivo Xplay (both China) as part of the Vivo Xplay Mobile Music Festival at the Beijing Contemporary Music Academy in Beijing, China, on 15 June 2013.

Guinness World Records also recognized the world record for the largest animated mobile phone mosaic; it consists of 400 smartphones and was achieved by China Unicom, Sohu IT and HTC (all China), using China Unicom’s WCDMA HSPA+ network, as part of the inaugural China Smart Device Games at the National Olympic Sports Centre in Beijing, China, on 13 July 2013.

Company president Ashok Kumar Chadha said the Android smartphone would have pre-installed apps that tie into Modi initiatives such as ‘Make in India’ and ‘Clean India’.

“Let us see what can we do to bring about a real liberation of Freedom to all our brothers and sisters,” he said in a speech, referring to the name of the new phone to make a play on words.

The phone has 8GB storage and cameras in the front and back.

First deliveries of the Freedom 251 phone are not expected before the middle of the year, according to Ringing Bells.

Ringing Bells was set up a few months ago and recently launched one of India’s cheapest 4G smartphones at 2,999 rupees, the Press Trust of India reported.

The industry has also raised concerns about the pricing of the device and has asked Telecom Minister Ravi Shankar Prasad to get into depth of the issue, saying the price could not be below Rs. 3,500 even after a subsidised sale.