Adventures In The Desert – Cheryl Rao 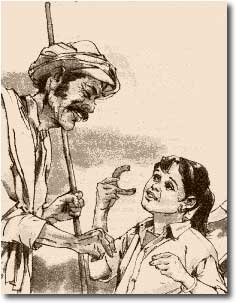 Two children from Mumbai spend a year in a small army township in the middle of the Rajasthan desert. Missing the urban sights and sounds, it takes them a while to get used to living in a place where the only excitement is a roll in the dunes. But adventure is just a sandstorm away and all too soon their stay is over.

An excerpt from the book:

The twins got their first taste of a desert winter. Early in the morning, they wore two layers of everything. Then, as the day progressed, the layers started peeling off, one by one, until only a single pullover was left.

At 5.30 in the evening, the cold descended again and they began to bundle themselves up once more-but only on days when they had nothing to do but think of the cold. Over the weekends, their father took them fishing and bird watching to the dozens of lakes nearby. Shweta, the systematic one, began to keep a diary of the different birds they saw.

“Look at this,” she said to Samir and Arjun at the end of one of their outings. She showed them her note book, in which she’d neatly written the names of all the birds and the dates on which she’d spotted them. Now she read aloud, “coots, shoveller, pochard, pintail, pelican, ibis, heron, avocet, cormorant, flamingoes, barhead goose, painted stork. Those are from our visits to the lakes.

“Of all the birds we’ve seen, I liked that huge eagle which we disturbed near its nest, remember?” declared Samir. “Do you think it would have attacked us if we’d found the nest?” “Definitely. According to my book, it seems to have been a Brahminy Kite. See, it says here that they are usually found singly, near jheels and rivers.”

Whatever it was, I got the fright of my life when it rose up from the bushes as I climbed the dune. It was so close that it looked gigantic.”

Well, I like the painted storks best. They are so regal. And they really look like they’ve been painted.”

What about the dead owl we found on our way to school?” asked Arjun.

Poor thing,” Shweta shuddered. “There was no blood on it, so it may have got electrocuted on one of the wires and died. Papa told me that it was the Indian Great Horned Owl. You can recognise it from the feathers on its legs. It probably stayed near our colony because of the number of rats it could get to eat.”

After several visits to the lakes, the children were in need of a change of scene. Their father took them to Bikaner.

“Come on,” whispered her father. “If you see a white rat, it is a sign of good fortune.”

Any rat which sees you will turn White,” muttered Samir, “Your good fortune is assured.”

Once she’d taken her first steps, the excitement got through to her and she scanned the animals desperately. “There’s one!” she pointed and everyone turned to look. There was a flash of white and Samir said, “Didn’t I tell you? All it needed was one good look at you!”

On their return trip, they stopped at Rangmahal, just outside Suratgarh. “ This is a village of snake charmers,” Jaideep Puri told them; but as they drove through, they saw no interesting baskets and no snakes. They came to a cordoned off area.

“What is that?” asked Samir.

“An archaeological site,” replied his father.

“You mean like an ancient town or something?” inquired Shweta.

“Yes. I don’t know how old it is supposed to be, but may be the villagers will tell us.”

Papa, I know how old it is! There were some things from Suratgarh and Rangmahal in the museum at Bikaner. They were of the 4th century A.D., so that makes this 1600 years old!”

Samir picked up a broken pot and looked at it.

“You’re nuts,” he said. “Nothing here looks more than ten years old. This is probably the dumping ground of the local potter!”

Shweta ignored him and went up and down each mound, picking up pieces of pottery and studying them. Samir caught up with her. “Sixteen hundred years ago, there was iron and bronze and so many other metals. Why isn’t some of that here?”

Obviously because it has been removed and taken to museums. Archaeologists are not going to leave valuable stuff here for anyone to pick up.”

“Oh Papa, can we go to Kalibangan?” cried Shweta excitedly. “We learnt about Kalibangan in the sixth standard! It is one of the sites of the Indus Valley Civilisation.”

The following weekend, they drove to Kalibangan. They reached the museum first and their mother forced them to read about the site.

Samir would rather have raced from showcase to showcase, and would have left the museum with images of ancient toys and pots and never a clue as to how old they were and how wonderful. Imprisoned at his mother’s side, he went past all the exhibits slowly, reading about each one, looking at the photographs in awe and expecting to see a well-ordered town as soon as he got out of the museum building.

“Where is it? Where is the town? Do you think it has a Great Bath like the one at Mohenjodaro?” he asked as they approached a couple of mounds behind the museum building. They were not dunes, and from, a distance, they looked stony and hard. “I think this is it,” said Jaideep Puri.

He followed a rough track between the mounds and stopped in front of a blue board. The children were bewildered. They read the usual notice that they had seen at other national monuments.

“But where is it? Where is the town?” repeated Samir.

Yes,” added Samir. “This is just a wilderness.”

An elderly man walked up to them and Jaideep Puri started talking to him.

“Come on kids,” he called. “He’ll show you everything.”

The children wandered back to where the adults stood, disappointed that they could not see houses and courtyards and walls and streets. The guide took them back the way they had come and then turned towards the right. He stopped dramatically after a few paces.

“This was the Main street,” he said.

The twins looked around doubtfully. Well, it was fairly broad, but that could be because so many modern-day vehicles had moved along it.

The guide saw the expressions on their faces, and he went ahead. He came to a dead end. He stretched his hands and pointed in both directions. “See, can you see the walls of the houses now?”

At last, the children felt a thrill run through them. They stood there and looked at the bricks of the walls of the houses opening out onto the street, it finally felt very real to them. “Now it looks like what it was,” cried Samir scrambling up to the top of the mound and skidding a bit on the bits of clay and the stones lying on the ground.

“What is this?” asked Shweta, picking up a curved bit of terracotta and showing it to the guide.

“A broken bangle,” he said. He picked up another piece and handed it to Samir. “You must have seen such pieces in the museum. These are all that were discarded and left behind.”

The guide nodded. “After each rain, you can find a lot of bits and pieces. Sometimes you find near-perfect pieces.”

His words had the effect of unleashing the combined energies of the twins. They left the guide to lecture to their parents and they raced around the mound, picking up all kinds of shards of pottery in the hope of being the ones to find the ‘perfect’ piece.

They found themselves standing on the edge of a deep square pit. “The Bath! The Bath!” cried Samir excitedly. The guide smiled and explained that the pit was actually the main road. Instead of excavating and opening up the entire stretch of road, only a portion had been dug up for study.

He picked up a few pebbles and threw them at the opposite wall of the pit to indicate three different levels. “Those are the marks of the floods,” he said. “On three different occasions, the town got flooded and each time it was rebuilt.”

“But how did it get flooded? Where did the water come from?” questioned Samir.

What is now the dry bed of the Ghaggar is what he means'” said Jaideep Puri. “After all the town had to be on the banks of a river. It was a river valley civilisation.”

They crossed an open space that the guide explained was the dividing line between the lower city and the upper city; He took them to one of the walls and said “Feel.” His hand was in a drain that opened out into the street. It looked like a regular modern pipe and the children were awestruck.

The guide moved a little distance away and said, “Here is the well,” pointing downward.

What do you mean?” asked Samir going to him and looking around. “Are we standing on the well? What happened to the well that they have shown in the photographs?”

“It was refilled and covered to protect it,” said the guide,” but this is the place where it is located and you can see the brick-lined drain going away from it.”

Are all these bricks 4000 years old? They don’t look like that. I feel that they could have been made at the brick kilns down the road and transported here.”

“You are right in a way” said the guide. “All the bricks are not old. A few new ones have been used to support the old structures at places.”

The children ran off to look for treasures. Shweta as usual, was not satisfied with merely digging out the shards and stone. She wanted to make a discovery of her own.

“Like what?” asked Samir, as he grubbed about in the mud, pretending to be an archaeologist.

“Oh, wouldn’t it be grand if we found another lost town like this? Think of it…” She sat down with her lap full of bits and pieces of terracotta and dreamed aloud. “May be we’d find the key to the Indus Valley script or something as wonderful…”.