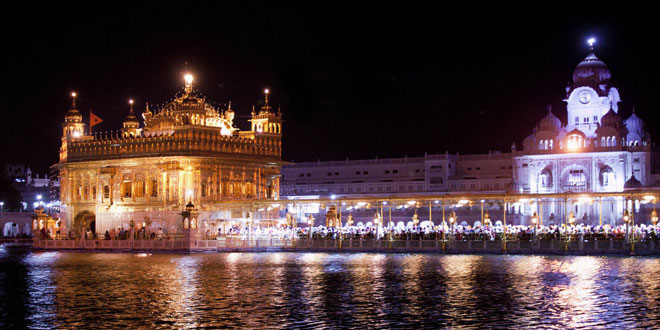 The Golden temple is also known as Harimandir Sahib and is located in Amritsar, Punjab. It is one of the most sacred shrines for the Sikhs. It is most commonly known as Golden temple because the upper levels of the gurudwara are entirely gold-plated. The gurudwara symbolizes equality, spirituality, brotherhood, honesty and trust. It also represents the historical customs, specific identity and glory of Sikhs. This gurudwara holds a lot of importance for every Sikh and is a source of motivation to follow the teachings of Gurus and to become a pure Sikh. The best thing about this shrine is that any person, irrespective of cast, creed or race, can visit the temple. The holy book of the Sikhs, the Guru Granth Sahib, is kept at this temple and since it is considered to be very auspicious, people from across the world come here to visit the shrine. The Guru Granth Sahib is also considered to be the eternal Sikh guru and the leader of all Sikhs. Devotees can enter the gurudwara from four gates. The four gates symbolizes acceptance.

In 1585 A.D, construction of the gurudwara was initiated by the fourth Sikh Guru, Guru Ram Das but was completed by his successor Guru Arjan Dev in 1604 A.D. Originally there was a small lake on the site of the temple which Guru Ram Das enlarged. Later on, Guru Arjan Dev built the gurudwara and after completing the Adi Granth, the first edition of the holy book of Sikhs, placed it in the center of the prayer hall. In the mid eighteenth century Jahan Khan, the Afghan general attacked the Golden Temple but he was killed by commander Sardar Dayal Singh. In 1760, the gurudwara was reconstructed. Maharaja Ranjit Singh contributed a sum of five lakhs to place the carved gold plate on the upper part of the gurudwara. It was done under the supervision of Bhai Sant Singh Giani.

On entering the gurudwara one is fascinated by the beauty of the Shrine. The dome and the upper floors have lavish gold coating which looks marvelous during sunrise and sunset. The marble work in the floors and walls are engraved with floral designs, lattice work and Sikh symbols and motifs. At the start of the causeway there is the elegant Darshani Deorchi. The chanting of the Gurbani accompanied with the harmonium, flutes and stringed instruments lends a very peaceful and serene touch to the whole atmosphere. The water of the lake surrounding the gurudwara is considered as ‘amrit’. Devotees believe that the water is holy and a remedy for many diseases. It is very essential to cover the head, be it a man, a woman or a child before entering the temple complex.

The most suitable time to visit the Golden Temple is from October to March when the temperature is moderate and the weather is pleasant and lovely.

Sri Guru Ram Das Jee International airport in Amritsar is connected to most of the major cities in India. The airport is also 11 kilometers away from the main city. From Delhi it takes only about an hour to reach there. The frequency of international flights is also increasing.

The Amritsar railway station is well linked with all the main cities of the country. For the convenience of visitors, there is a small booking counter on the complex of the Golden Temple. Once you reach the railway station, you can hire an auto-rickshaw or a taxi to reach the temple.

There are daily bus service from every nearby towns and cities. It takes 6-7 hours by bus from New Delhi, Dharamshala, Jammu and Katra. There are public and private bus services to and fro from Amritsar.

The Golden temple is very impressive and its beauty cannot be explained in words. It has a great significance in the life of Sikhs. This shrine has also been a representation of the fight for independence of the Sikhs in the eighteenth century. The picturesque beauty of the shrine is magnificent. This temple is one of the locations in many Bollywood movies like Bride and Prejudice, Rang de Basanti, Namastey London and Rab Ne Bana Di Jodi.