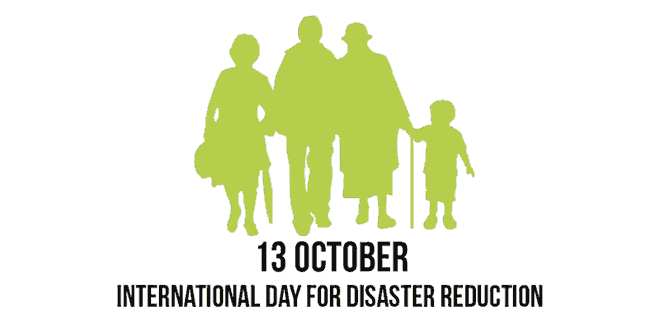 International Day for Natural Disaster Reduction is observed annually on 13th of October with a view to spread awareness about natural disaster and various ways to manage the crises. Natural Disasters take place in almost all the countries of the world and are common to mankind since this world came into existence. The natural disasters include typhoons, earthquake, cyclones, avalanche and tsunami.

The celebration of International Day for Natural Disaster Reduction is witnessed in form of various activities that are schedules for the entire day. These activities make the community and people in the community aware about the risks that are accompanied by the natural hazards. The focus of this annual observance is on local, indigenous and traditional resilience. Students in particular contribute a lot to this day by organizing speeches, exhibitions, debates, programmes and various other activities.

This year’s theme for the day is “Substantially reduce disaster damage to critical infrastructure and disruption of services through developing resilience by 2030”.

UNESCO (United Nations Education Scientific and Cultural Organization) prepares the member states to reduce the risk arising out of Natural Disasters. Several events were and will be organized in coming days in this regard globally.

UNESCO also sends teams to restoration of heritage sites those have been damaged by the natural disasters.

A special interactive event is organized at Paris in France on Wednesday 16th October 2019 by the UNESCO. The attendees will be briefed about the tools and services by the UNESCO for managing natural disaster and for reducing its effects in educational institutions.

International Association for Preparedness and Response

The International Association for Preparedness and Response is an organisation that was formed in 1962. It is a non profit organisation that consists of volunteers, professionals and associations that are active in all phases of calamity emergency and preparedness schemes. This organisation provides professional networking, resource distribution and leading opportunities in response to disasters. This organisation has been now working for more than 4 decades in the response and recovery to build a prowess defence system against the natural disasters.

The celebration of International Day for National Disaster Reduction commenced from the year 2009. The General Assembly of United Nations decided to observe the second Wednesday of October as International effort to reduce Natural Disaster. Later by 64/200 resolution of the assembly which was passed on 21st December 2009, a clause was introduced to amend the second Wednesday clause and a fixed date i.e. 13th October of every year was to be observed as International Day for Natural Disaster Reduction.

The agenda was to raise awareness amongst people and encourage them to take action to decrease the threat of disasters worldwide. At the 3rd World Conference on Disaster Reduction, the United Nations was made abreast of the negligence made by the people that had resulted to a higher number of disaster related deaths than the previous years.

Why Is International Day for Natural Disaster Reduction Celebrated?

The observance of this historical day is significant because it is a platform to spread awareness about Natural Disaster, their different categories, consequences and the methods to curb natural disasters. On this day various activities are planned in schools, academic institutes to spread the knowledge regarding these disasters. Training in form of mock is given at state as well as national level so as to prepare everyone for all types of eventualities.

This day is vital because it stresses on making all the people in the world self-reliant before any kind of calamity hits them, it also emphasizes on dissemination of the threat. It imparts education to all the people about the risk that comes to mankind with the occurrence of such natural disasters.

How Is International Day for Natural Disaster Reduction Celebrated?

International Day for Natural Disaster Reduction is observed annually to raise vigilance about the repercussions of changes that are going on in our environment which leads to calamities. Millions of people are encouraged to come forward and talk about their efforts they have been putting to understand this menace which has lead to loss of people and property.

These people encourage others to get involved in awareness-raising campaigns and a number of activities are organized for the commemoration of International day to reduce the risk of natural disasters. The staff of various governmental and non-governmental organizations lance awareness programmes.

The media plays a major role by organizing number of volunteer programs online. The young generation nowadays use face book, twitter and other social applications on this day to spread the theme of International Day for Natural Disaster Reduction. They share events in various states, famous environmental quotes and facts, add photos based on the theme of that particular year. The country wise celebration of this day is given below:

India is a huge country and the population of the country is utilized with a positive attitude to spread the awareness of disaster and disaster management. The contribution of this nation is significant to the rest of the world because the occurrence of calamities in India is higher than expected, but the resilience is slow and not speedy in any way.

On the International Day of Natural Disaster Reduction, the entire population makes an approach to the people of all the generations to join them in this fight in a mass number to get themselves aware of the real environment threats and also be the agents of campaigns for the promotion of reduction in the natural Disasters.

The celebration takes place in schools, colleges, universities through various activities to generate and spread awareness and promote disaster management methods that can bring positive changes in the climatic conditions.

International Day of Natural Disaster Reduction is celebrated by students very enthusiastically in the United States of America. The day witnesses huge rallies launched on roads, students giving speeches on disaster management and its reduction. Students also organize campaigns to advocate on this topic and thereafter find different measures to curtail the occurrence of natural disasters.

Government on this day provides recognition and scholarships to the prudent citizens for inventing ways to curtail the disaster risk. United States of America is a developed country and there are not much natural disasters that take place, and the efforts during the previous year have created a resilience force stronger than ever.

The International Day of Natural Disaster Reduction is observed on 13th of October and the world’s largest population contributes in best of its capabilities. Like any other developed country, the occurrence is low but on this day, people of China make their best efforts to participate and aware other countries as well.

On this day the schools, institutions and various organisations launch campaigns to let others comprehend the importance of evaluation, evacuation and relief during the disasters. The main objective of International Day of Natural Disaster Reduction is to prevent the risk of calamities, mitigate the repercussions of the disasters, build capacity through research, detection at early stages and finally post calamity rehabilitation.

The celebration of International Day of Natural Disaster Reduction is an annual occasion held in Australia. The day is jam-packed with a lot of activities like science exhibition on new models, the speeches of adroit scholars from the field of disaster management; the local and non local data is presented by the community officers to update people on new methods of resilience. On this day, the government machinery is trained to see disaster management as a routine part of their administration.

India is a country of enormous physiographic diversity and vast areal expanse. Also, India is the second most populous country in the world. When combined such geographical variability with constant anthropogenic interference, people of the country get vulnerable to human made and natural hazards. Vulnerability from disasters differs from one community to another. Psychological preparedness in a community even plays a very crucial role in reducing the vulnerability and risks of the disasters.

Events like earthquake, accidents, floods, tsunami, fire etc require highly trained teams. The training of teams for disaster management is being done nowadays by so many countries and same should be done by India as well. Natural disasters and huge causalities appear to be in the destiny of India. So to fight this with an iron hand majorly three modes have to be practices and this day is the best platform to start this new initiative. These three models are adoption mode, demonstration mode and finally dissemination mode.

The below given suggestions should be implemented on this day;

The International Day for Natural Disaster Reduction is one of a kind and each year the celebration is enjoyed by the people of the world with a new theme. The Theme of International Day for Natural Disaster Reduction, 2017 is “Sendai Seven” based on the seven motives of Sendai convention for seven years. Sendai seven campaign initiates to foster implementation of the framework for the reduction of disaster risk with the objective of reducing disaster losses, saving lives and enhancing the disaster risk management.

The theme is kept keeping in mind the urgent steps that are to be taken in the near future so as to eliminate the threat of Natural Disasters in all its forms. Sendai convention is a 15 year, non binding and volunteer framework from 2015 to 2030 which outlines seven most urgent targets of all the organisations working worldwide to reduce natural calamities. This theme emphasizes on understanding disaster risk, investing in the risk resilience, in fortification of disaster risk governance to manage the risk of disasters and modifying the ways of preparedness. Themes of previous years are:

To conclude, we can say that disasters will be there. We cannot totally avoid disasters as long as we are living in the lap of nature and we have no way out in this regard. Since, we need to live in a natural environment, we need to be little more careful regarding the disasters, be it man made or natural. An appropriate disaster management is amongst the most crucial tasks left for the mankind. If we successfully chalk out an ideal scientific management plan, then it would be possible to reduce the impact of disaster which the mankind is confronted with and is the cry of the current day.

Effective planning is always the best response to anything that is not under our control and this is what one must do in the case of natural as well as man-made calamities.