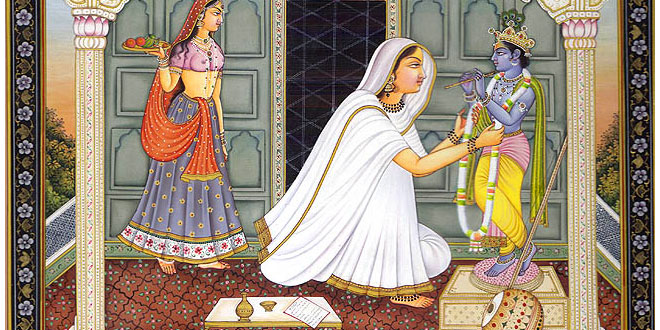 Strange Is The Path of Love: Devotional Poem by Hindu mystic poetess Mirabai

Do not mention the name of love,
O my simple-minded companion.
Strange is the path
When you offer your love.
Your body is crushed at the first step.

If you want to offer love
Be prepared to cut off your head
And sit on it.
Be like the moth,
Which circles the lamp and offers its body.

Be like the deer, which, on hearing the horn,
Offers its head to the hunter.
Be like the partridge,
Which swallows burning coals
In love of the moon.

Be like the fish
Which yields up its life
When separated from the sea.
Be like the bee,
Entrapped in the closing petals of the lotus.

Mira’s lord is the courtly Giridhara.
She says: Offer your mind
To those lotus feet.

Mirabai was a Hindu mystical poetess whose compositions are popular throughout India. Mirabai is held to have been a disciple of Ravidas. Mirabai composed between 200 to 1300 prayerful songs called bhajans. These bhajans are in the bhakti tradition, and most passionately praised Lord Krishna. The extant version of her poems are in a Rajasthani dialect of Hindi and in Gujarati. Many of the details of Mirabai’s life are pieced together from her poetry and the stories later recounted by members of her community. While Mirabai’s hagiography is held as truth by followers of the bhakti tradition, the historical authenticity of most of her story is the subject of scholarly debate.
Share
Previous Story of Tenali Raman and Golden Peacock सुनहरा मोर
Next I am true to my Lord – Mirabai Devotional Bhajan in English