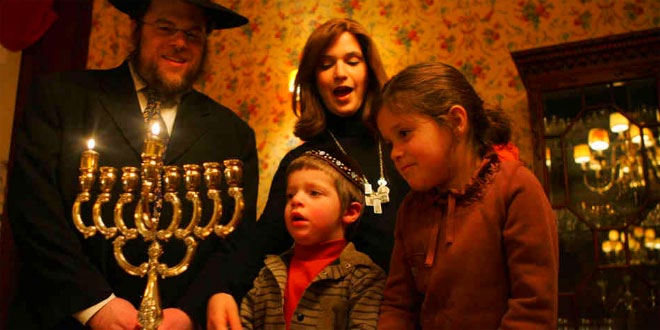 At last! At last! Hanukkah is here!
The whole house is bursting with holiday cheer.

Pancakes are sizzling as hard as they can,
Browning delectably crisp in the pan.

The dreidels can scarcely wait to be spun;
Presents are hidden for Hanukkah fun;

And there, on the table, polished and bright,
The shining menorah gleams through the night,

Like the oil lamp in ancient history,
That burned on and on miraculously!

And each flaming candle proclaims the great story
Of the Maccabean heroes, their deeds and their glory.

Hanukkah - The Jewish Festival of Lights

Hanukkah is the Jewish Festival of Lights and it remembers the rededication of the second Jewish Temple in Jerusalem, in Israel. This happened in the 160s BCE/BC (before Jesus was born). (Hanukkah is the Hebrew and Aramaic word for ‘dedication’.) Hanukkah lasts for eight days and starts on the 25th of Kislev, the month in the Jewish calendar that occurs at about the same time as December. Because the Jewish calendar is lunar (it uses the moon for its dates), Kislev can happen from late November to late December.

During Hanukkah, on each of the eight nights, a candle is lit in a special menorah (candelabra) called a ‘hanukkiyah’. There is a special ninth candle called the ‘shammash’ or servant candle which is used to light the other candles. The shammash is often in the center of the other candles and has a higher position. On the first night one candle is lit, on the second night, two are lit until all are lit on the eighth and final night of the festival. Traditionally they are lit from left to right. A special blessing, thanking God, is said before or after lighting the candles and a special Jewish hymn is often sung. The menorah is put in the front window of houses so people passing can see the lights and remember the story of Hanukkah. Most Jewish families and households have a special menorah and celebrate Hanukkah.

Hanukkah is also a time for giving and receiving presents and gifts are often given on each night. Lots of games are played during the time of Hanukkah. The most popular is ‘dreidel’ (Yiddish) or ‘sivivon’ (Hebrew). It’s a four sided top with a Hebrew letter on each side. The four letter are the first letter of the phrase ‘Nes Gadol Hayah Sham’ which means ‘A great miracle happened there’ (in Israel, ‘there’ is changed to ‘here’ so it’s ‘Nes Gadol Hayah Po’). Each player put a coin, nut or chocolate coin in a pot and the top is spun. If the letter is ‘nun’ (נ) come up nothing happens, if it’s ‘gimel’ (ג) the player wins the pot, if it’s ‘hay’ (ה) you win half the pot and if it’s ‘shin’ (for ‘there’ ש) or ‘pe’ (for ‘here’ פ) you have to put another item into the pot and the next person has a spin!

Food fried in oil is traditionally eaten during Hanukkah. Favorites are ‘latkes’ – potato pancakes and ‘sufganiyot’ – deep friend doughnuts that are then filled with jam/jelly and sprinkled with sugar.

Previous When is Hanukkah this year?
Next Hanukkah Quotes: Hanukkah Messages, Sayings