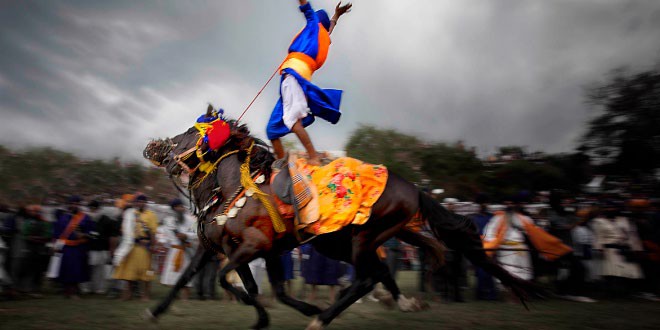 The festival was founded by Guru Gobind Singh, the tenth Sikh Guru. The Guru was in the midst of fighting both Aurangzeb of the Mughal Empire and the Hill Rajputs, and had recently established the Khalsa Panth. On 7 March 1701, Guru Gobind Singh started a new tradition by overseeing a day of mock battles and poetry contests at Lohgarh Fort. The tradition has since spread from the town of Anandpur Sahib to nearby Kiratpur Sahib and the foothills of the Shivaliks, and to other Gurdwaras around the world.

According to Guru Gobind Singh’s court poet Bhai Nand Lal, colors were thrown by the participants after completion of the mock battles. Sikh tradition holds that Guru Gobind Singh also participated in the colorful festival with the use of gulal which has survived into modern times with Nihangs “splashing gulal (red farinaceous powder) on each other and the audience”. The alternative view is that the practice of throwing colors was not observed by Guru Gobind Singh.

Hola Mohalla builds upon the festival of Holi. The Sri Guru Granth Sahib prescribes celebrating Holi by serving God. The colours of Holi manifest in the Lord’s love. As Holi starts with Holika Dahan on the full moon night of Phagan or Phalgan, the festival of Holi is referred to as the festival of Phalgun even though the actual day of Holi falls on the first day of the lunar month of Chett. Sri Guru Gobind Singh Ji built upon this method of celebrating Holi by adding a martial element and creating Hola Mohalla to be celebrated a day after Holi.