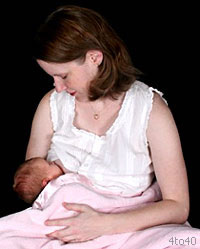 But, occasionally a baby has to learn to suck. Especially in cases where the mother has flat or very short nipples. In the latter case, the nipple may not go far enough into the mouth to start the reflex. It is important to tell these mothers to be patient and not give up. There are ways of getting round the problem.

Do not exhaust yourself and the baby by trying to feed continuously. Speak to your gynaecologist. She will help you stretch the nipple and offer it to the baby properly. And, she will also teach you a position which will be most comfortable for you to feed.

Sometimes, if the breast is engorged with too much milk, the nipple may become flat, making it difficult for the baby to latch on to it. In such a situation, express a little of the milk. This will make the breast a little softer and easier to grasp.

Engorgement may occur on the third or fourth day when more milk comes into the breast. Extra milk must be removed by expressing the breast near the areola with the thumb and the index finger. The nipple should not be squeezed as it becomes painful.

A good supporting bra should be worn. Engorged breasts are painful and the baby finds it difficult to suck from a tense hard breast. This is so because normally the baby, while sucking, pulls the nipple right to the back of his mouth, and is actually sucking the areola.

Engorgement may also lead to a breast abscess unless the excess milk is removed in time. Let the baby continue to suck as far as possible. If the baby can not suck well enough to remove enough milk, you should express the milk. Hand expression is the best but you can use a pump also.

Putting a warm compress on the breast or having a warm bath helps. After expressing some milk, you should put the baby to the breast. Continue to express as often as necessary to make the breasts comfortable.

Breast pumps cause swelling of the nipple which may also lead to infection. Hence, manual expression is best. In successful breast feeding there is hardly any problem with engorgement. Wearing a bra with a good support also prevents engorgement in the dependent part.

One of the possible causes for a baby refusing to suck could be neonatal tetanus. Or, the baby may be suffering from a minor problem like a blocked nose.

If the nipples have become flat due to engorgement, express a little milk before putting the infant to the breast again. If the baby still does not succeed, let him suck through a nipple shield for a few days, until the engorgement subsides.

Sometimes, a mother’s nipple may be too big for an infant to suck. He may seem to gag and choke if the nipple is too long. And he may either turn his head away or cry when put to the breast. This situation can be easily handled by holding the baby a little away from the breast.

Too Much Milk, Too Fast

In some cases, the milk flows too fast due to a heightened ejection reflex. It fills the infants mouth too quickly and chokes him. In a such a situation, babies often start fighting the breast. What you could do is express some milk before feeding the baby.

When you are feeding, you notice a queer feeling — as if the milk is almost on the verge of coming out through the other breast. This sensation is caused by what is called the ‘let down reflex.’ It releases the milk and causes muscular contractions in the breast, forcing the milk out.

Share
Previous Substitutes For Breastfeeding
Next Swollen Ankles And Feet