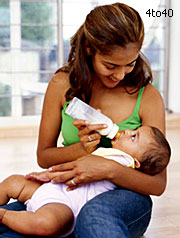 The bottle can also be a bond between the mother and the baby. The mother can hold the baby in her lap and the closeness can be as satisfying as it is while breast feeding. The trouble arises when the mother thinks that since she is not breast feeding the baby someone else can do the bottle feeding as well. Some mothers prop up the bottle against a cushion or a pillow.

This not only robs the baby of the feeling of closeness with mother, but the bottle may roll down, or the baby may be sucking a lot of air with milk if the position is not right.

It must be remembered that bottle feeding is time consuming, requires good facilities for sterlising the bottles, and, or course, is expensive. Mothers keep changing the brand of milk because they believe that a particular brand has not suited the baby. They keep comparing notes with their friends and neighbours and get further confused. Everything considered, breast feeding remains the easiest method to feed the baby.

The bottle and the teat should be thoroughly cleaned with soap or detergent, using a bottle brush for the bottle. Salt helps to remove milk curd from the teat. After cleaning, the bottle and the teats should be completely immersed in a pan of cold water and boiled for about five to 10 minutes. It is better to keep a separate saucepan or basin for boiling bottles.

After boiling and cooling, the water can be drained and the pan kept covered. Some bottle boiling kits are also available, but an ordinary large saucepan is good enough. It is better to have three or four bottles so that you do not have to boil a bottle before every feed.

The bottles can also be sterilised by immersing them in a solution of sodium hypochlorite (Milton or Steriliq) which is available at most chemists. One tablespoon (15ml) of the solution is added to a litre of water and the bottles are soaked in it for three or four hours. They should be drained well before use. Fresh solution is made every day.

Lugols iodine, five drops to a litre of water, can also be used for sterlising the bottles. Since a cup or a glass is much easier to clean, the baby should be encouraged to drink from it as soon as possible. Many mothers continue with bottle feeding for their own convenience, and not because the baby cannot drink from a cup.

Most teats have holes in them but at times the hole may be too small. It can be made bigger with a sewing needle. Make it red hot by holding it in the fire with a pair of forceps or kitchen tongs and pierce the teat with it. From a hole of the correct size, milk should flow out drop by drop when inverted and flow like a stream when the teat is pressed as baby would do while sucking.

The baby may be sucking vigorously and yet keep crying. Obviously he is not getting any milk. The hole in the teat is probably blocked. The teat should be changed or the hole cleared.

The baby may cry and take the bottle out of his mouth. The milk may be too hot or too cold. The hole in the teat may be too small or too big.

A baby on bottle feeds swallow more air and will nee burping half way through the feed or certainly at the end of it. Some babies are very obliging and will bring up wind quickly; others take a long time. You can put down the baby in the cot for a few minutes and pick him up again. Often the change in position from a lying down to an upright position will make the gas bubble come up.

The position of the bottle while feeding is important. The teat end should always be filled with milk so that no air goes in.

Giving the Bottle While the Baby is Asleep

Many mothers give a bottle to the baby while he is asleep either because he has not had enough during the day or the mother does not want to be disturbed at night and so makes sure that the baby does not get hungry. This should only be resorted to temporarily if the baby is fussy and irritable because he is unwell or teething, and is being difficult about taking a feed. Otherwise this not only starts off a bad habit, but may also result in dental decay resulting in caries, caused by the milk remaining in contact with the teeth while the baby is asleep.