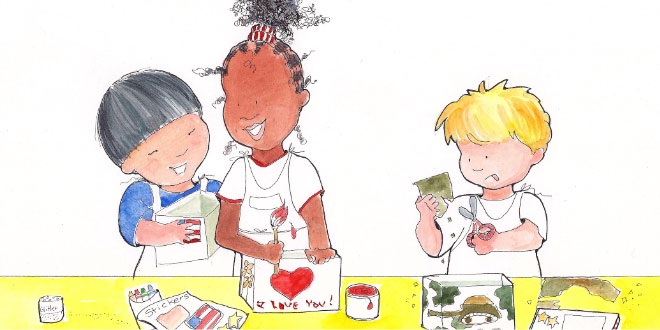 A sense of success grows slowly in children, since they are prone to feeling inadequate around adults. To help children succeed, create situations where failure is least likely. It also helps if you can be alert to their fear, embarrassment, and likely areas of failure. You will learn to notice their hesitancy in such areas. Rather than pushing or forcing them, follow their lead, support and encourage what they want to do, use whatever motivation is present. Instead of trying to change their focus of interest, you might look for ways to support that interest. Often that very interest will supply a way to the desired successful learning and growth.

As Tommy began to draw, I asked him to describe to me what he was drawing and why. A story emerged. A squirrel-like creature decked in Levi’s, cowboy hat, and guns was coming through the swinging doors of an old-fashioned western saloon. As he penciled in more details, he elaborated the adventure more and more.

As Tommy drew and talked, I began writing in a notebook the words of his story exactly as he spoke them. When the half hour was over, he had produced a very interesting drawing and a very interesting story; and I told him so. I said I would type out his story and bring it to our next session. We talked about how at our tutoring sessions he could draw a picture and tell a story, and that would be part of our work together. I have a notion it didn’t sound like work as far he was concerned, for he was delighted at the suggestion.

The stories that emerged from the drawings became our first reading materials. (By the way, this was not a new idea. Sheila Ashton Warner in a book called Teacher wrote about children creating their own stories to read). Since the child recognizes his own words, it’s easier to learn to read them. And since he’s produced the story, the potential for reading successfully is built in. I had taken Tommy’s interest, followed it, supported it and, with him, found a way for it to be a basis of our tutoring mandate: for Tommy to learn to read.

From pictures and stories we graduated to the Sears catalogue, which he liked because of the large section devoted to toys. Selecting toys he wanted for Christmas became a tool for learning handwriting and organization skills as he copied information and made out order blanks for the items he liked.

Tommy’s story is a success story. In only four months he had gone from being a nonreader to a third-grade reader; he was right up there with his class soon after Christmas. I didn’t have a magic wand, but I had acknowledged his wellspring of interest, which seemed to work its own magic for him, enabling his intellectual growth to happen without stopping his creativity.

I, had learned from Mrs. Chilton, my first mentor, to recognize realistically what a child can or cannot do. “Be sure you don’t ask them to do something beyond their limits in the beginning,” she used to say, “because their inevitable sense of failure will make them not want to try a second time.”

Mrs. Chilton had taught primary school for more than forty years and claimed she never had a child she couldn’t teach to read. (It is only fair to add that she always worked in private schools, where she did not have to deal with highly disturbed or retarded children.) She believed every child could learn to read; it was up to the teacher to find the way in which each particular child could learn. She went on to explain how success breeds success. She stressed how teachers needed to build a sense of success in a series of very easy steps so that a child’s self-esteem and self-confidence were functioning optimally on their behalf when presented with each task in the series.

For example, when working with her class on a new story from the reader, she would introduce all the words of the story before the children were presented with the story itself. A little red paperback – called Fox and Hen, I think – was the very first reading book she gave her class. It didn’t have very many words. Yet before she handed out the books to reads, she presented the class with every word – on the chalkboard, on picture cards, on posters – till she was reasonably sure the children were familiar with every word in the book. Lots of little successes were building up among the children. Next, she took one of the books for herself and read the story aloud to the children. Third, she gave each child a book, and as they opened it to the first page, she began to read it again, and the whole class read it with her. Each child felt a sense of success, because the experience of being able to read was present to each one on some level. As I watched, I could see the surprise and delight in the children at being able to read the first book given to them in school! Step by successful step, Mrs. Chilton had let them to and through the task, and certainly their self-esteem was enhanced.

For Mrs. Chilton, to learn was to succeed. She believed in using every opportunity as a positive learning experience. It couldn’t have been more than the first or second day of class I worked with her, when a little girl spilled her carton of milk. As soon as the child began to whimper, Mrs. Chilton noticed the child’s problem. She calmly but quickly took some paper towels, walked over to the puddle of milk, and addresses the class: “Let me show you how these paper towels can absorb.” She then proceeded to give the children a lesson in the process of absorption. The child who spilled the milk, instead of merely being embarrassed at the her spilling, could be relieved to know she had provided a special learning for the class. If Mrs. Chilton’s quick response didn’t enhance the child’s self-esteem, it certainly didn’t damage it as would have been the case had the child been scolded for the accident and left to the teasing of her peers.

The same success principle applies at home. When you ask a child to do things, choose tasks that child can do successfully, so he or she can enjoy the approval and self-esteem that comes from doing a task successfully. Don’t ask young children to set the dinner table without first showing them how. Better, begin one step at a time. Today, ask them only to put out the napkins; show them how to do it for one plate and see that they succeeded in doing the rest. Building on success with napkins, you can then invite them to carry out the more complicated arrangements step by simple step.

It’s more important that you show children new to a task how you want it done. Then later you won’t be forced to say, “That’s wrong,” or “That’s not the way I wanted it done.” Showing the way fosters success. If it is not done the way you wanted, you can then gently ask, “Do you want me to show you again?” which is an invitation to cooperation rather than a rejection of their effort.

By the way, you can always thank a child for trying even when the child doesn’t fully succeed. Valuing children’s effort s also enhances their self-esteem.

Self-Esteem Principle: Success builds self-esteem. It works well every time, and best when the line of successes remains continuous and unbroken.