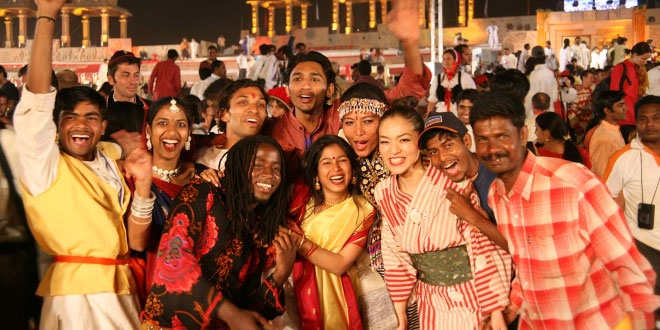 The seven-acre stage created by the Art of Living Foundation for its World Culture Festival on the Yamuna flood plain here caused a bit of public inconvenience as most of them faced difficulties in having a point of focus.

With evening rain showers affecting TV screens, people could not see Prime Minister Narendra Modi and Art of Living Founder Sri Sri Ravi Shankar while they spoke on the occasion.

The cultural performances were also spread over the huge stage.

The Art of Living volunteers hoped the stage and the performances will subsequently find a place in the Guiness Book of world records.

Some of the foreigners carried their national flags at the cultural event. Many Argentinians were in T-shirts similar to their famous football team.

With traffic stopped near the Nizamuddin bridge, people including many foreign nationals had to trudge long distance to reach the gates marked for them.

Pakistani participants, who were near the stage, were waiving their huge national flag.

Though the intermittent but heavy rain showers affected the arrangements, the volunteers kept their enthusiasm intact. A rainbow appeared in the sky after the final shower of the evening, bringing a big cheer among the volunteers.

A year of preparations

It took the Art of Living almost a year of preparations for the three-day show that began on 11th March, 2016.

Almost 15,000 volunteers were on the ground to help with logistics. There was an effort to see that litter was not flung around. Volunteers were collecting plastic bottles and other discarded stuff.

People had a hard time figuring out location of toilets. With mud and slush to cope, people were unwilling to trudge long distances and many preferred to ease out in the open. Mosquitoes too gave a tough time to people during the show.