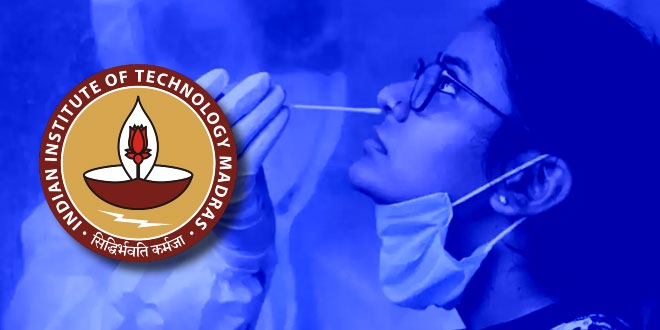 The engineering institution has informed that close to 60% of all students and staff members have been tested for the Wuhan Coronavirus and that the remainder of the process is underway.

As many as 66 students and five staff members of IIT Madras have tested positive for the Wuhan Coronavirus infection since December 1.

As per reports, the premier institution has now been placed under temporary lockdown. IIT Madras has now emerged as the largest Coronavirus cluster in the city of Chennai. Although the source of the outbreak is yet to be ascertained, students believe that it has been due to overcrowding in the hostel mess. Reportedly, the State government had allowed the functioning of educational institutions in the State from December 7.

The engineering institution has informed that close to 60% of all students and staff members have been tested for the Wuhan Chinese Virus COVID-19 and that the remainder of the process is underway. IIT Madras has shut down all its Departments including labs and libraries. Reportedly, a total of 700 students are residing in 9 hostels on-campus.

IIT Madras informed in a press release that the institute is functioning with only 10% students in hostels. “As soon as a spurt in symptomatic cases was reported by some students residing in the hostels, the Institute has consulted the civic authorities and has arranged for all students residing in hostels to be tested for COVID. To be cautious, all students have been asked to remain in their rooms and packed food is being supplied to the students in the hostels,” the institute said.

It further emphasized that Standard Operating Procedures (SoPs) have been laid down for research scholars and project staff, working in labs, and can work in a safe environment. “Research scholars who wished to return earlier (out of turn with respect to the SoP involving quarantine before release into the hostels) were permitted to do so if they were willing to stay off campus similar to project staff, till their turn came to be accepted in the hostels, and provided their lab could accommodate them,” IIT Madras added.

“Some Project Staff working on research projects and staying in the city have been coming to work in the labs, once this was permitted by the government. A SoP is in place to determine how many scholars and project staff can work safely in each lab based on its size, ventilation etc.,” the release read. The institution clarified that it was in touch with civic authorities and adhering to safety measures.