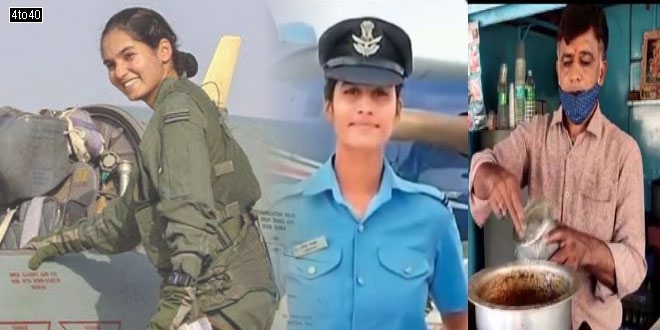 Anchal Gangwal, the daughter of a tea seller in MP becomes a flying officer in Indian Air Force, awarded the President’s plaque

Aanchal Gangwal is one of the 19 women officers who were commissioned by the Indian Air Force (IAF) in the combined Graduation Parade (CGP) ceremony at Dundigal in Hyderabad on Saturday (June 20, 2020). She had left two government jobs and had tried for years to realize her dream of joining the IAF.

Aanchal Gangwal, the daughter of a tea seller from a small district in Madhya Pradesh is now a flying officer of the Indian Air force. According to reports, the small-town girl from Neemuch district in the north-western part of Madhya Pradesh fought all odds to become one of the 19 women officers who were commissioned by the Indian Air Force (IAF) in the combined Graduation Parade (CGP) ceremony at Dundigal in Hyderabad on Saturday (June 20, 2020).

The event which began at 8.45 am on June 20, saw as many as 123 air warriors being commissioned by the Indian Air Force. Aanchal Gangwal was awarded the President’s Plaque for standing first in Ground Duty branches.

In an impressive Combined Graduation Parade (#CGP), 123 flight cadets were commissioned into IAF by the CAS ACM RKS Bhadauria on 20 Jun 20, AFA, Dundigal. Wings were also awarded to 11 officers from #IndianNavy & #IndianCoastGuard on successful completion of flying training. pic.twitter.com/8gbnLw49Yq

Aanchal holds a graduate degree in Computer Science from Sitaram Jaju Government Girls College in Neemuch, Madhya Pradesh and had earlier worked as a sub-inspector in the MP Police Department and a labour inspector in MP Labour Department for eight months, before joining the Air Force Academy (AFA).

Chief Minister Shivraj Singh Chouhan has taken to Twitter to congratulate and bless the 24-year-old girl from Neemuch district. He wished that all the daughters of India, grow, prosper and achieve great heights like her.

Recalling the struggles of her father Suresh Gangwal, who has been running a small tea stall at the Neemuch bus stand for a living, Aanchal said: “When I was a school kid, I had decided to be in the defence. Today as I become an officer, it still feels surreal. It is a dream come true.”

“I used to dream of this day almost every night. To stand in my uniform, in front of my father and mother, who have fought all the difficulties in their lives to get me here. However, due to Covid-19 that could not happen. But I am happy that they could see the ceremony on television,” said the IAF new recruit. Unfortunately, owing to the restrictions due to the Covid-19 pandemic, Aanchal’s parents could not attend the passing out parade at Dundigal AFA.

Aanchal calls her parents the pillars of her life

“When I told my parents that I want to be in defence, they were a little worried like any parent. But they never tried to stop me. In fact, they have always been the pillars of my life,” furthered Aanchal.

Speaking on Air Chief Marshal RKS Bhadauria’s brief at the passing out parade that this year the newly commissioned IAF officers would be proceeding straight to their next units to shoulder their responsibilities instead of going home for a break, Aanchal said: “I am always ready to serve my motherland and see this as an opportunity to do so.”