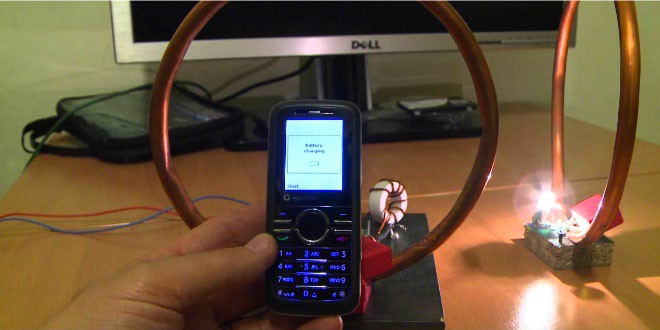 Researchers have developed a new Wi-Fi-style technology that allows multiple mobile devices to be charged from a distance without the need for chargers.

With this technology, so long as mobile users stay in a designated area where the charging is available, eg, the Wi-Power zone, the device, without being tethered to a charger, will pick up power automatically, as needed.

The system developed by The Korea Advanced Institute of Science and Technology (KAIST) in South Korea is capable of charging multiple mobile devices concurrently and with unprecedented freedom in any direction, even while holding the devices in midair or a half metre away from the power source, which is a transmitter.

The research team led by Professor Chun T Rim of the Nuclear and Quantum Engineering Department at KAIST successfully showcased the technology on July 7 at a lab on KAIST’s campus.

Either 30 smartphones with a power capacity of one watt each or 5 laptops with 2.4 watts each can be simultaneously and wirelessly charged at a 50 cm distance from the transmitter with six degrees of freedom, regardless of the devices’ three-axes positions and directions.

This means that the device can receive power all around the transmitter in three-dimensional space. The maximum power transfer efficiency for the laptops was 34 per cent.

The researchers said that to fabricate plane Tx and Rx (Receiver) coils with the six-degree-of-freedom characteristic was a bottleneck of wireless-power transfer for mobile applications.

The degree of freedom represents mobile devices’ freedom of movement in three-dimensional space.

Although wireless-power technology (WPT) has been applied to smartphones, it could not offer any substantial advantages over traditional wired charging because the devices still require close contact with the transmitter, a charging pad.

To use the devices freely and safely, including in public spaces, the WPT technology should provide mobile users with six degrees of freedom at a distance.

Until now, all wireless-charging technologies have had difficulties with the problem of short charging distance, mostly less than 10 cm, as well as charging conditions that the devices should be placed in a fixed position.