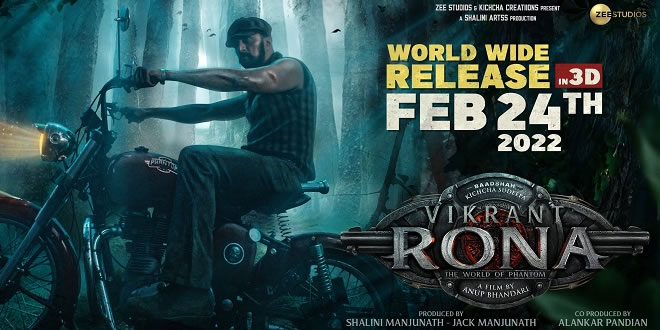 Primary photo shoot began on 1 March 2020, and filming started on 2 March at Hyderabad under the title Phantom. Actor Sudeep began filming Kotigobba 3 and Phantom simultaneously. Nirup Bhandari was cast in the role of Sanjeev Gambhira. When the team preparing for second schedule COVID-19 pandemic hits badly and the works stopped. On 13 June, the crew announced they would resume shooting in July. Then on 16 July 2020, they resumed their work amid pandemic at Annapurna Studios, Hyderabad, by constructing huge dense forest set. Most of the filming done in Annapurna Studios and Ramoji Film City Hyderabad. Other shoots were done in Malshej Ghat, Mahabaleshwar and Kerala. Jacqueline Fernandez plays prominent role along with a song appearance. Now the movie is ready to hit screens on 28 July, 2022.

Music director B. Ajaneesh Loknath composes songs and background music for the movie and its his first collaboration with actor Sudeep.

The film was scheduled to be released worldwide on 24 February 2022 in 10 languages with 3D version, but as of now got delayed due to the second wave of the ongoing pandemic. The film is now confirmed to hit screens on 28 July, 2022.

The satellite and digital rights of the Kannada version have been purchased by Zee Kannada and ZEE5, respectively. It was officially announced by Zee Kannada head Raghavendra Hunsur in his channel’s show, Zee Kutumba Awards in 2021.

Despite an unusual premise and Kichcha Sudeep’s swag writ all over, Vikrant Rona is not a winning combination. Blame it on poor Hindi dub or bizarre twists, this Kannada outing ends up as a mediocre

Fantasy meets horror meets action… And what do you get? Well, a mixed bag that engages and loses you in equal measure. To be honest, the premise is unusual, the technical effects befitting a spectacle and cinematography by William David remarkable.

On top of it we have long-limbed Kannada superstar Kichcha Sudeepa, whose chutzpah and style are writ all over and each act of his oozes unmistakable charm. The way he lights up his smoke, the manner in which he bashes up goondas, his dialogue delivery… It’s a swag ride all the way. Of course, like all superstar vehicles Vikrant Rona too circles around its titular character played by Kichcha Sudeep. Mercifully, this mega-budget Kannada film starring a mega-star has a plot, even if contrived, that packs intrigue, thrill and elements of phantasmagoria.

The film begins with a prologue of sorts. A young woman accompanied by a daughter, whose face we don’t see, drives through a dark deep tropical rain forest. We get goose-bumps for early on we have been informed this is a legend of Brahma Rakshasa. Some supernatural forces (or so we are made to believe) bring the car to a screeching halt.

Few moments of unadulterated horror lead us to another scene. Lest we forget though it does not exactly tell you which year it is; it is somewhere in the recent past when petrol prices were not even in double digits. The village in Kamarottu is enveloped by mysterious forces leading to one macabre death after another, including that of an inspector. What adds to the dance of the dread is that innocent children are being killed and hung on trees.

In walks Vikrant Rona (Kichcha Sudeepa), an inspector along with his lovely daughter who keeps proffering him gyan, yes on phantoms too. Their bond is touching. Only as perplexing is the fact as to why a concerned and doting father has brought his daughter (Baby Samhitha) into such a dark, desolate place? Well, there is credible reason behind it, which we can’t give away for that would be a spoiler.

That is not to say rationality thy name is Vikrant Rona. The story and the back-story involving a low caste family are not without loopholes. A couple of sidetracks are only a distraction device, to throw us off the scent of murders. In a bid to capitalise the horror dimension and to up the mystique quotient, twisted twists and turns abound. In parts, these manage to keep you invested in the drama. Intermission comes with yet another turning point. Or is it really?

The suspense hangs heavy and the atmospherics are enveloped in dark tones and shades as we roll over an item song by Jacqueline Fernandez who has been roped-in for pan-India effect. But her bubbly presence and equally effervescent song Ra Ra Rakkamma, otherwise lilting and breaking the net, seem like a commercial imposition. Masterfully executed action sequences are laudable and actors like Neetha Ashok as Panna and Nirup Bhandari hold their ground. The climax unfolds at its own pace and as is with most mediocre thrillers, there is greater fun in speculating whodunit rather than in knowing/understanding actually who did it?

Yet another spoiler is the dubbing in Hindi. And we strongly suspect the humour and punch-lines get lost in translation. What doesn’t lose its charm are the visual effects. The 3-D film is in VFX overdrive, enhancing the horrific aura of the film. The loud background score, however, is a dampener. But nothing can dilute the star charisma of Kichcha Sudeepa. Watch it, if only to know how South-Indian stars own the screen.