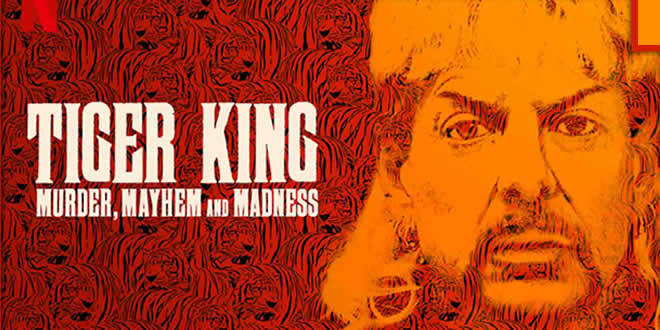 Tiger King: Murder, Mayhem and Madness (titled onscreen as simply Tiger King) is a 2020 American true crime documentary miniseries about the life of zookeeper Joe Exotic. It was released on Netflix on March 20, 2020. The series focuses on the small but deeply interconnected society of big cat conservationists such as Carole Baskin, owner of Big Cat Rescue, and collectors such as Exotic, whom Baskin accuses of abusing and exploiting wild animals. A special hosted by Joel McHale was released on April 12, 2020, with McHale interviewing several of the stars about Exotic and the series itself.

The series received acclaim from critics, and according to Nielsen ratings, was watched by 34.3 million people over its first ten days of release, ranking as one of Netflix’s most successful releases to date.

Last heard, Ranveer Singh too was reeling from the hangover of the Netflix’ Quarantine smash-hit Tiger King. And as only Ranveer can, the Bollywood actor turned Joe Exotic in a social media picture, even as the series went viral. ‘What are you finding so funny, that’s you on most days’, commented lady love Deepika Padukone! A statement we couldn’t help agree with, for there is absolutely nothing funny about the five billion streaming minutes that the true crime docu-series has in just over a week so far.

‘It’s a crazy beginning’, to the series we mean, thereby starting from the very statement that kickstarts the seven-episode documentary as well. “Animal people are nuts man,” says one of the managers at the zoo, whom we later discover lost both his legs to an accident. That’s not even the twist we are counting.

From there on the narrative takes over, basically introducing you to two principal characters, the Joe, Oh So Exotic. The gay gun-toting operator of an Oklahoma big cat park, a private zoo keeper if you must. And, how at one point the narrative brings it down to one line, “If he ever had an enemy in his life, it was Carole Baskin.”

Say hello to the founder and CEO of Big Cat Rescue, a sanctuary devoted to caring for big cats. She wanted to shut down the zoo and he wanted her gone. Now how complicated is that? Simple story, real people, and eccentricity that only imagination can afford. He’z crazy, but she’s no less.

Allegations, politics, FBI, the dead skeletons that keep popping out and unverified theories. Much of the story unfolds at Joe’s zoo, Greater Wynnewood Exotic Animal Park on Olahoma. From thereon, it’s a melange of the people concerned; the managers at the zoo, tapes of visitors, kids and their selfies with the big cats, shots of the beasts held captive and handled like ordinary pets.

A little difficult to segregate from the show is the publicity that overnight virality always offers. Some reports and some rumours to do with how the Netflix series is all set to get its own comic book adaptation; in the meanwhile, Joe Exotic is in talks to broadcast new radio show from jail.

Though there’s no denying the information that any docu-drama invariably affords. Much more than the murder plot at play, it’s the Joe of Joe Exotic that takes over. From learning he was gay, being told by his father not to turn up at his funeral, driving his car from over a bridge and surviving, doing magic shows only to tell children not to do drugs. “My real name is Joe Schreibvogel,” he says in one of the taped interviews, “nobody could learn how to say it right so I changed it.” Currently serving a 22-year sentence after being found guilty of a murder for hire plot against Carole Baskin, and an inmate at the Grady County Jail Oklahoma, not your average Joe this. Nor an ordinary story. And most definitely not a missable series!